A safe, natural sweetener with zero calories and zero aftertaste that doesn’t cause cancer in lab rats? Is that a dream too good to be true?

Stevia is fast becoming my favorite formerly-unknown sweetener, if only for the mystery surrounding it, the foodie vs. government controversy, and the fact that I feel confident recommending it to diabetics, a rarity. But is stevia safe? 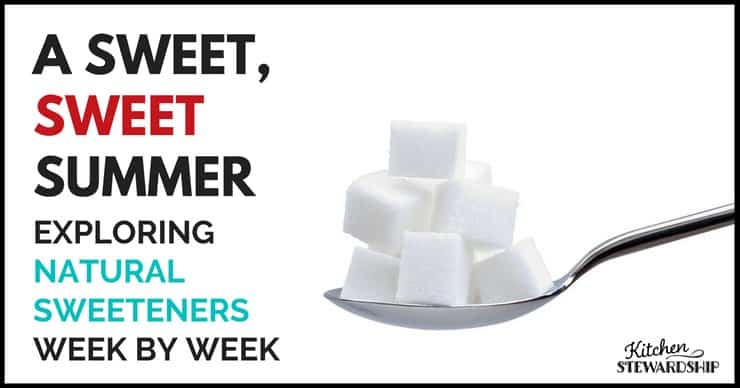 If you asked me about stevia a year ago, I would have been skeptical. I would have told you I just wasn’t sure about it, both from a safety standpoint and an aftertaste issue.

Now I’ve found a few brands that I like, no aftertaste, and I keep seeing more positive than negative press on the health benefits or dangers of stevia.
This post is part of a series on natural sweeteners.

What IS Stevia, Anyway?

If you’ve never looked into stevia, I’m guessing you think it’s a white powder in a little packet.

In truth, stevia is a green plant grown much like mint, an herb whose leaves are 30-50 times sweeter than sucrose (table sugar).

It’s been cultivated and used both as a sweetener in tea and for its medicinal properties for centuries in Paraguay and other parts of South America.

Stevia is named after Spanish botanist Pedro Jaime Esteve, which means it’s pronounced “STEH-vee-uh” with a short “e” like “step,” not “STEE-vee-uh” like “steep.”

The dried green leaves can be used to sweeten beverages, but from what I understand, there is a bitter aftertaste and certain flavor to the leaves that makes them undesirable for use as a general sweetener. However, if you can find the green powder, you know you have a completely unprocessed form of stevia.

UPDATE: I’ve used the green powder now, and although my husband doesn’t like it in yogurt, I don’t mind it, and it’s really quite good in tea – just add it in while you steep your tea.

When processed, manufacturers seek to extract only the sweet part of the leaf, called rebaudioside A, which is 300 times sweeter than sugar. The process usually involves drying the leaves, using water for the first extraction and then narrowing the product down to only the sweetest part with methanol or ethanol. (source)

Warning sirens just went off for the naturally minded among you, right? Ethanol and methanol aren’t parts of a normal, healthy diet.

Generally, a liquid extract of stevia is less processed and doesn’t need the chemicals that the white powder form requires. I imagine it’s a bit like making vanilla extract or mint extract or something.

In my experience, having tasted the liquid extract from NuNaturals and multiple powders, the liquid extract is much more desirable as far as flavor goes. It sweetens with little to no taste added, whereas most powders have a bitter, off aftertaste that reminds me of artificial sweeteners, which I despise. Ever gotten the wrong soda at a restaurant? I can tell immediately if there’s aspartame in something.

I had previously written off the powders as too highly processed – how do you get a white powder from a green leaf, anyway? – and yucky tasting anyway. I’ve tried stevia powders from Sugar in the Raw, Truvia, NuNaturals, and SweetLeaf. Only the SweetLeaf brand has no aftertaste (a very little one, actually, but you have to be paying close attention to notice it).

This makes sense because Sweetleaf is processed completely through cool water extraction, no chemicals allowed. The white powder is white, and not green, simply because the reb-A is not related to the chlorophyll in the plant, which is responsible for the green color. Most other brands also include fillers in their powders, including dextrose (corn sugar) or erythritol.

My husband actually prefers the NuNaturals brand, and he hates the taste of artificial sweeteners as well. Others tasted it for me on some fresh Michigan strawberries earlier this summer and had mixed reviews. My father and godfather both thought the powder was just fine.

My mother and godmother, with more discerning palates I believe, both thought the NuNaturals powder was terrible. My godmother does use artificial sweeteners and still disliked the aftertaste; she says she’s tried TruVia and it made her physically ill.

The bottom line? Stick with liquid stevia when possible and check the background of the company’s processing with powders.

Unlike most other sweeteners, stevia can actually have medicinal properties as well, including:

Stevia is a zero-calorie sweetener, which is a nice bonus. It also does not increase your cravings for sweet things like consuming white sugar can

Possible Dangers and Disadvantages of Stevia

There are a couple issues with stevia that may make you pause before making it your primary favorite sweeteners.

On the baking side, because stevia has no bulk, it is difficult to replace sugar in your favorite recipes. There are some “baking blends” that add things like erythritol or other fillers to stevia so that you can sub 1:1 with sugar.

I tried NuNaturals brand of stevia for baking, subbing it for half of the sugar in my healthy pumpkin muffins. Disaster. The batch had a really odd aftertaste that most would probably guess was an artificial sweetener. I would never do it again, honestly. Not worth ruining the batch, even though the muffins were still edible – they just weren’t nearly as fun to eat.

Sweetleaf is coming out with a baking blend that uses inulin as a filler. Inulin is a soluble fiber found in all fruits and vegetables that humans don’t digest. I must say I’m curious to try this one.

On the health side, there are (as usual) conflicting reports on overall safety of stevia. In Paraguay, it is sometimes used as contraception, and there are one or two studies that confirm its contraceptive effects. However, I don’t know if the extract retains that property or just the whole leaf. I tend to avoid allowing my daughter to consume it because of that – who knows what it might do to her developing reproductive system?

This source (link no longer available) makes a good point that in Paraguay, where people consume stevia leaves on a daily basis, family sizes in the double digits don’t seem to support the fact that stevia could be a contraceptive. It also cites a few studies that found no link.

Many sources say there is no harm in stevia, but large doses in animals has been linked to “interference of carbohydrate absorption, metabolism disruption, reduced sperm production and conversion to mutagenic compounds.” Um. Blah. We don’t know if any of that happens in humans, of course, and is a “large dose” beyond anything one could consume, or is it similar to what I’d experience if I switched all my sweeteners to stevia? (source)

There has been some concern about minor GI effects, headaches and dizziness with Stevia. In addition, some studies have commented about purity and toxicity concerns. Mixing Stevia with sugar alcohols may have a laxative effect. Pregnant women, diabetics and those with high blood pressure should avoid using Stevia due to possible side effects. (source)

Since stevia has been used regularly as a sweetener in Japan for 40 years and commandeers 40% of the sweetener consumption there, I think we can watch their experience to determine possible health risks. So far, nothing has come of it negatively.

The last downside is certainly the cost – you’re definitely going to pay more to make lemonade with stevia than with white sugar, and perhaps even more compared to sucanat.

Tomorrow I’ll share an interview with Jim May of SweetLeaf, who calls himself the “father of stevia.” You’ll love the juicy political controversy!

Read all the Sweet, Sweet Summer postings for more on alternative sweeteners.

Do you use stevia? Why or why not?

Disclosure: Amazon links earn a small commission. I received products for my review from SweetLeaf and NuNaturals. I am an affiliate of Mountain Rose Herbs. See my full disclosure statement here.

102 Bites of Conversation So Far