Do you have a binder of recipes that your extended family gave you at your bridal shower that you wish you could use more, but all the processed ingredients make you squirm?

Are the family favorites in your recipe card box collecting dust because of all the fake foods on the ingredients lists?

Do you miss the comfort food casseroles that use cream of chicken soup because you refuse to buy those cans anymore?

If you wish you could cook from scratch without finding all new recipes, you need Better Than a Box. If your family complains that they miss their old favorites now that you’re trying to eat less processed foods, I can help.

The goal of Better Than a Box is to teach you to reverse engineer the processed parts of any recipe and create delicious real food renditions. You’ll gain confidence in the kitchen, finding the courage to toss in a little of this and a little of that, even if you’ve always been a “measure to the correct 1/8 teaspoon” sort of chef before.

From habits and routines to make sure you always have certain things on hand, to tips for saving dishes as you cook up a storm, and even “recipes” you will be able to cook by heart, this book will help you have the real food lifestyle you want without compromising the food your family loves.

I worked on this book behind the scenes for about two years, no kidding. Recipe testers were trying things out for me after readers sent me some of the “old favorites” to try to reverse engineer for real food.

It’s been fun tweaking others’ family recipes and then sending them back to see what the families think. Our family has discovered a few new favorites, that’s for sure!

Today I’m excited to share a sneak preview with you, a free printable download of just one of the recipes included in Better Than a Box.

It’s the classic creamy chicken casserole topped with Stove Top stuffing mix…but no boxes, cans, or even bags were opened in the making of the new and improved “real food” version. There’s even a gluten-free rendition that is equally as good as, maybe better than, the original (and just as frugal!). 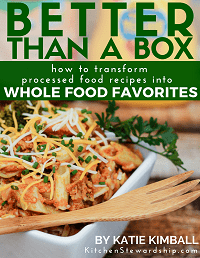 The entire first section of Better Than a Box is a teaching tool, an opportunity to step into the Kitchen Stewardship classroom and learn how to reverse engineer ANY recipe to make it work with real food.

I share strategies, checklists, tips, and visualizations, and then you get to peek into my head as I tweaked recipes just like the downloadable excerpt above.

CLICK HERE to check out Better Than a Box!

Want to see from whence the crunchy-topped chicken casserole came?

The recipe was actually sent to me by (at least) three different readers, slightly different each time:

The reader who sent the second version included a note:

“We love this as it is a real comfort type food, and easy and relatively quick to make. Those boxes and cans make it easy, but they’re also the reason we’ve avoided it for awhile – too many preservatives and other oddities for such a simple meal! I’d love for it to be real food, tasty and reasonably healthy.”

My goal as well!

How to Reverse Engineer a Recipe I looked at the recipes, which I could tell were quite similar, and visualized it this way:

The amounts in each recipe were pretty different, so I knew it would be hard to go totally wrong as long as I hit all four categories.

Another reader sent one from Tammy’s Recipes, which pretty much reverse engineered the sauce but still used stuffing mix on top. I decided to start with hers and fiddle from there, like so:

I increased the onion simply because I like more onion flavor. I added some chicken broth again, for flavor and nutrition reasons. I switched the chicken because I always have cooked chicken on hand from making whole chickens into chicken stock, and I advise as such in the book, too.

Reverse engineering the stuffing mix took a little more doing. I read boxes of stuffing mix in stores and wrote down what was in them, along with the “how to” instructions, which includes melted butter.

I estimated the quantity of bread crumbs that would be needed to nicely cover a 9×13 pan. I Googled “homemade stuffing mix” and started to compare the seasonings. I got an idea of what total quantity of seasoning should be used for 2-3 c. bread crumbs (about 2 ½ tsp. spices plus salt and pepper), and then I started experimenting.

It turned out it was pretty hard to go wrong with these delicious seasonings and toasted bread!

I Googled “homemade poultry seasoning” and it was then that I realized poultry seasoning had a lot of the same ingredients as I was already using. Hence, the “either or” options in the recipe, which is kind of nice in case you don’t have something needed. Testers (and my family) have enjoyed the recipe both ways. I’ve probably made the meal five or ten different ways, including sometimes two variations on one pan (toasted vs. untoasted bread, for example). Even with all the differences, I never made a meal that we didn’t like.

Be bold in the kitchen! Experiment! You can makeover your recipes from scratch!

Every real food cook needs some basic resources that everyone recognizes.

If you have a desire to cook real food more fluently or gain confidence in remaking some of your own processed style recipes using only whole foods, you’ll love the bestselling eBook Better Than a Box.

With 60 ready-to-go recipes and 100 pages of kitchen tutorials, your family will be singing your real food praises in no time. Click HERE for more info on the premium package, including the Kindle version.