It’s ok if your skin is crawling looking at that picture! I can hardly stand it!

Typically to fulfill the mission of Kitchen Stewardship®, we’re sharing science geek info on things like why aerosol sunscreen is dangerous (and safe, frugal sun options for your family) or time-savers like beef barbacoa in the Instant Pot, but today, I have a PSA of a different kind.

Plain and simple, y’all need moth traps. And I need to go swap mine for new right now! (brb, k?)

They’re not very expensive. You can put a quick recurring reminder in your calendar for every 3 months. It takes about 3 minutes to put a new one out.

And they will save you from losing time, money and food on this:

It began with an innocent 5-year-old question a few years ago: “What’s that moving on the wall?”

Better answer: The sign of a pantry moth infestation and a morning of hard work, along with some finger crossing that they don’t come back.

If you don’t know, pantry moths often come into the house in packaged foods like rice or pasta (although I’m thinking ours flew in on their own because they mostly infested my homemade strawberry fruit rolls, much to my near-tearful dismay).

They lay eggs in just about anything, can chew through plastic bags with ease, and become nasty little centimeter-long larvae, which turn into more moths, which lay more eggs…forever and ever and ever, until you (a) hide all the food from them in glass jars at best or hard plastic containers at least, and/or (b) kill them all.

We’ve had enough years pantry-moth-free to confidently say we know how to keep them away – but not enough that I don’t quake in terror when I see that photo!! In fact, in the last 3 months I’ve seen a pantry moth literally fly out of a box from Amazon into my face (he earned the wrath of a crazy woman and didn’t know what hit him) AND one was in our refrigerator!! They are nasty little things and can really come from anywhere.

We want worms in our compost…not our pantries. 🙁

To get rid of them, here’s what we had to do: I also had pantry moth traps in the house in their packages – I had purchased them immediately after reading another blogger’s story of pantry moth infestation. It terrified me…but the adrenaline had worn off by the time Amazon delivered, and the box sat unopened for at least 3 months. Horribly ironic, right?

Once I finally read the directions, which took about 90 seconds to implement, I decided to put one in the basement with our bulk food storage and keep the other one in the package (!!!) for the end of the 3-month freshness period on the first.

I did not put one upstairs in the pantry. (I would live to regret that, obviously.)

This experience is the first time I’ve been grateful to have two tiny cupboards as a “pantry” instead of a huge room full of food that I would have had to throw away.

My kitchen cupboards are a classic example of the mixture of “no time now, do it later” and “that will take too long – just fix it temporarily.”

I have implemented temporary “fixes” all over the place in my kitchen, and it ends up hurting my efficiency all the time. 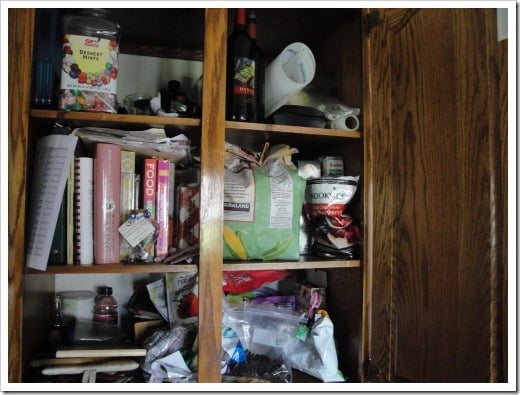 This is my pantry before I organized it. Notice all the bags tumbling about…

When the moths invaded, I decided to finally put all my dry beans and gluten-free flours in hard-sided containers instead of the bags they come in. I thought that for sure I wouldn’t have enough space in my lazy Susan, one excuse lazy me had for never getting around to that task.

I’m just grateful the moths didn’t actually find those stores, since they’re far from the pantry cupboards I guess. Once I put everything into mason jars, reused coconut oil tubs and other plastic containers, I cleaned off the shelves (always a good yearly activity even without impending moths) and reloaded everything back in.

I thought I had gone batty and kept looking around for what I was missing. The problem? I had more empty space than I had before, without throwing too many things out. Getting organized actually created more space, even though I fully expected the new containers to take up more space than soft-sided bags.

I realized the biggest eye opener of this situation. I do know how to prevent the problem – I just have to take the time to do it. Ah, I can actually see what I have in there! Doesn’t it just make you feel content?

Making Change with a New Attitude My new philosophy and goals to keep the ridiculous “temporary” fixes from happening again include:

What lesson did I learn (ahem, am I learning)? Most big projects aren’t so big if you tackle them right from the start, and putting off things like organizing and putting away ends up wasting a lot more time than it saves.

You can apply the same principle to your health – just as my cupboards were never going to get any more manageable until I took at least one step in the right direction, you’re never going to magically get healthier without taking steps to own your health, to reduce the bad stuff going in, increase the good stuff, and improve the physical activity.

Kick the Bad Habits – and Get Those Moth Traps!

I challenge you to get a “just do it” attitude, whether you need a little kitchen efficiency reset, organizational goals, or making a big new step in your quest for health.

Use the energy and time you put into temporary solutions to create lasting changes instead.

And please help protect your pantry by making a QUICK decision to get moth traps before you suffer an infestation!

What do you cut corners on that ends up biting you? (pun intended?)