This post is from guest writer Katy of Finding Home

In our family of six, three of us are gluten intolerant. When we realized we had to cut out an entire group of foods, we didn’t immediately turn around and try to bake a cake. In fact, the first time a birthday rolled around, I actually bought a boxed cake mix for the first time in years because I was intimidated by gluten free cakes! (I wish I had known about Katie’s alternative birthday cake options!)

There were too many new ingredients and new methods to figure out at one time. If you’re faced with cutting out sugar, you don’t immediately try to remake your favorite cookie recipe with natural sweeteners and different substitutions.

You figure things out one step at a time. Because here at Kitchen Stewardship we’re all about balancing health, nutrition, budget and time without going crazy.

If you’re new to a way of eating, the best thing to do is focus on what you CAN eat. For gluten free eating, maybe you start out by focusing on chicken and vegetables. If you’ve only ever steamed frozen veggies out of a bag in the microwave, maybe first you learn different ways to prepare them, like roasting.

If you’ve only dealt with chicken breasts, maybe you move on to cooking a whole chicken. When you’re comfortable with that, you can move on to adding another ingredient or method.

Our Version Of Gluten Intolerance

When we first found out our daughters were “non-celiac gluten intolerant,” it was tough to figure out what to feed them. We were still pretty new to this real food journey, and a lot of our easy shortcuts were still processed foods, many of which had gluten.

Some things were easy to change. Gluten free bread took the place of whole wheat, corn tortillas took over for flour. But some things weren’t so clear. Soy sauce has gluten in it? Barley is also a glutinous grain? It’s not just the bag of flour that needs to be replaced.

And even that isn’t black and white, because trace amounts of gluten don’t bother my girls. So we don’t need the certified gluten free oats, or the $8 tiny bottle of soy sauce. But someone else might. Someone with higher sensitivities or allergies may need to replace their entire kitchen.

Most humbling part of our mostly gluten free living so far

I realized that I was gluten intolerant too. It too me far longer than it should have to figure out that my digestive issues lined up fairly well with the symptoms I had been researching when the girls started having problems a few years ago. The reality is, it’s not just me in the kitchen, and I’m not the food choice dictator. Having dietary restrictions forces us to talk about the reasons we choose the foods we do – not only for those things we can’t eat (like gluten), but also why we choose recipes with lots of vegetables, why we save sugary treats for special occasions, and so on. And because there’s a lot of prep work when you’re cooking real food for 6 people, there are plenty of opportunities to get the kids in the kitchen as well!

It’s really easy for me to get in the habit of being in control in the kitchen, and doing everything myself, because my little people can’t do things very well yet, and I can get things done a lot faster. After all, when it’s 90 degrees out, do you really want to spend extra time in the kitchen with the oven on?

But I have to remember that many of the little kitchen skills I’ve picked up in the past few years are things I can teach my kids right now, so that they go into their adult lives knowing how to do this stuff already.

A gift from Katie’s family to yours!

My 4 kids and I created the Kids Cook Real Food eCourse to help bring real food and independence to families all over. Over 10,000 kids have joined us and we want to share the love – please grab your FREE copy of

10 Snacks Your Kids Can Make Read more about it here…and a little tip – you may also get a chance to grab a knife skills class for kids for a ridiculous discount, so watch out for that!!

They’ll be ahead of where I was when I started life on my own, and hopefully they’ll learn even more! And even if they’re not interested in spending a lot of time in the kitchen, the basic skills I can teach them now will help them to be able to make smart food choices later on when I’m not there to be a control freak about everything they eat.

Just like I’ve learned things one step at a time, my kids can too. They can learn to cut a banana with a butter knife, then move on to chopping up softer vegetables with a sharper knife, and before you know it, I have helpers to chop up all the different components for Sweet Potato Breakfast Hash!

Cooking food from scratch means you’re going to spend more time in the kitchen. There’s no getting around that. But by including your children in the prep work, you not only spend quality time with them, you also get to teach them skills they’ll carry with them for the rest of their lives.

And the best way to learn?

One step at a time.

What is one step you can take toward getting your kids in the kitchen today? Katy is a stay-at-home-mom of four (going on five) and wife of a pastor in northern Oregon. She writes at Finding Home about parenting, homeschooling, and plenty of gluten free food, and recently released her second cookbook, Real Food How To: Recipes To Teach You How To Cook From Scratch. Inside you’ll find 20 chapters, each dedicated to teaching one kitchen skill. While this book isn’t necessarily directed toward children, both kids and adults will be able to learn by doing, making recipes that focus on building up those particular skills. You can also find Katy on Facebook, Instagram, Twitter and Pinterest.

That’s why we took the best 10 rookie “Monday Missions” that used to post once a week and made a printable checklist so you can track your progress. 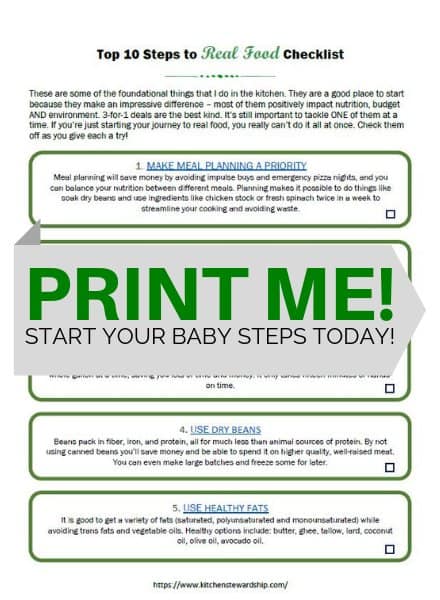 Sign up to get the checklist and weekly challenges and teaching on key topics like meal planning, homemade foods that save the budget (and don’t take too much time), what to cut out of your pantry, and more.

Get the Checklist, and ONE Baby Step a Week