I remember sitting down at the computer to write this story with a brick in my chest, hoping that God had a plan for the events of my recent trip to the grocery store. During a week in which I had asked people to be conscious of the food they waste, I had just caused ten unopened boxes of perfectly fine food to be thrown away by a grocery store.

What happens food that’s returned to the grocery store?

I purchased the items a few weeks ago at Family Fare – they were an amazing deal after a rebate. Free, actually. How can you pass that up? I had some misgivings at the time, because it wasn’t very healthy food. (Hamburger Helper – but don’t tell anyone!)  My husband likes the stuff, though, so I knew it would get eaten eventually.

I’ve never seen a rebate expire so fast, but it had to be postmarked by the last day of the promotion, so when I filled out the form a week later, I was already way too late. Frustrated at my waste of time, I decided I would take the whole lot back to the store so I didn’t waste money, too. 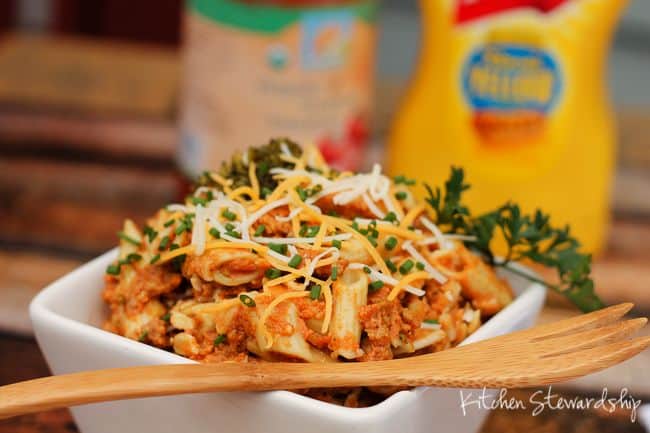 I have since discovered a successful, homemade substitute for Hamburger Helper!

After the clerk rang up my return, squinting at me in disgust the whole time, she put Xs on the tops of all the boxes with a black marker. It slowly dawned on me, washing me in dread, what those marks meant, and the ramifications of what I had done.

The greed of “free stuff” coupled with the carelessness of not reading the small print immediately, along with the “efficiency” of taking things back when the rebate failed…all together meant that all 10 boxes were going to be thrown away, completely wasted.

My mind whirling, I tried to make the decision about whether I should cry out, “Cancel the return! I can’t stand wasting food!” or just continue as planned. It was a foundational moment of Kitchen Stewardship tension, really – the tug of my money and my time vs. my family’s nutrition (I was very aware of the unhealthiness and relative “fake”ness of the food in question) and the environment.

All that packaging, all that food and “food” product, all the fossil fuels used to transport the stuff, the impact on the landfill…Arg! Also aware that the clerk already thought I was nuts to be returning the stuff, I stayed mute and let the atrocity continue.

I did ask some questions, though, and I hope we can all learn from this.

It turns out that any item that can go into the mouth must be disposed of if it has been previously sold. I asked for clarification, and the clerk said, “Meijer does the same thing.”  From what I gathered, it’s either a law or a fairly standard policy practice among supermarkets. Yikes!

In the past, I have bought and returned food without considering that it might be thrown away. Just this week I returned some spices that I bought on sale, only to find a WAY better deal a few weeks later, before I had opened them. Goodbye, sweet cloves and allspice! I didn’t know I was dooming you to the dumpster! 🙁

Now I understand that I can’t treat food purchases as I do clothing (which, with kiddos, I often buy without trying on and return what I don’t like). I must be certain I want/need an item and that it is my pricepoint before I purchase. Shame on me for all that food I wasted!

I will accept responsibility for my food purchases and never return anything unless it is defective or unsafe for my family.

For more inspiration to reduce food waste and balance your nutrition, your budget, and the earth:

Will you think a bit more about your food purchases now that you know that any food you return will get thrown in the trash?

39 Bites of Conversation So Far