My family embarked on a long road trip around the US this summer, and I’ve been sharing pictures, of course, on my personal Facebook at least once a week, and my elderly aunt who lives in Colorado exclaimed, after looking at one picture of our family climbing some rocky terrain, “I can’t believe you went hiking over those rocks in those shoes!” 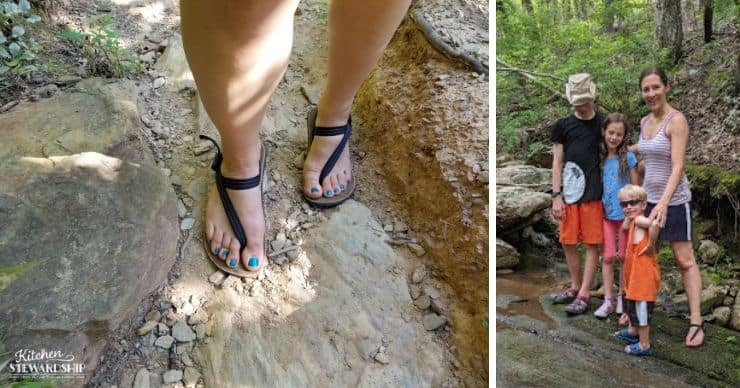 I had to explain to her that they were Earth Runner shoes and actually made for hiking and trailblazing. The Earth Runners have a thin sole, but it’s Vibram brand, which is well known within the Barefoot shoe crowd. (Read more about barefoot and minimalist shoes here.)

The Earth Runner shoes were actually designed by someone who was trail running and only had flip flops with him. He is an engineer, and he dug in his bag and ended up using some medical tape to tape his flip flops to his instep and discovered that they worked really well.

After doing some research into Native American tribes who were great runners over rough terrain, he discovered that they had a similar style of shoe.

His goal with Earth Runners was to make a shoe that had a thin enough sole that you could feel the terrain over which you’re walking, yet be sturdy enough to stay on really securely and keep your feet and ankles safe.

The Earth Runner also has a piece of metal on the bottom with the goal of earthing, or connecting one’s body to the electrons in the earth…or something like that.

Definition: Earthing (also known as grounding) refers to contact with the Earth’s surface electrons by walking barefoot outside or sitting, working, or sleeping indoors connected to conductive systems, some of them patented, that transfer the energy from the ground into the body.

Here’s a study from the National Center for Biotechnology Information.

I wasn’t sure if these shoes would be sturdy enough for me to enjoy them hiking out on the trails, and I was a little worried that I would have shopping mall feet by the end of the day. You know that feeling when you’ve been Christmas shopping for way too long, and the bottoms of your feet are just throbbing and you want to cut them right off?

I had worn the shoes a few times in our own neighborhood for a walk, but that was on cement, and I was a little unimpressed with how they felt. Of course, that’s not the purpose of them.

When we went out on this hike, I decided to just give it a go, and I didn’t actually realize that we would be making an 800-foot elevation change over a mile hike with tons of rocks to scramble over. I thought it was just going to be a low key test of the shoes, but instead, it was jumping into the deep end for sure.

I was impressed with the way the sole bends around the rocks, and I actually really appreciated the ability to feel what was underneath me. 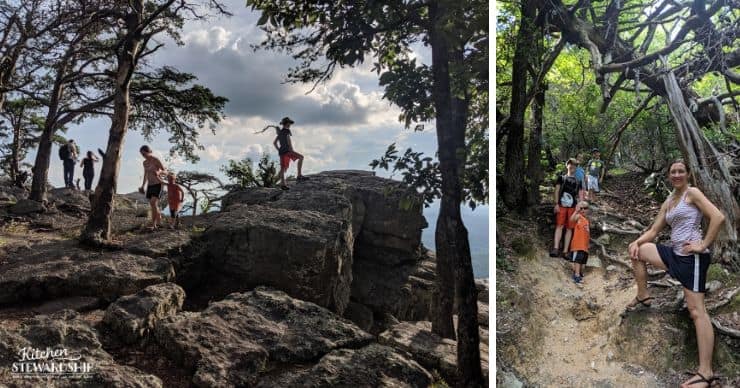 The sole has lots of grippiness on the bottom as well, and again, I appreciated not slipping and sliding down all of the angled rocks that I had to stand on in order to get from one place to another. I’m sure my four-year-old did too as I was holding his hand and he would not have been able to catch me.

Another benefit of the thin sole of the Earth Runner is that I felt perfectly confident splashing through streams and even wearing them right into a river when we swam under a waterfall. They definitely protected my feet from the rocks and slime beneath and even acted like flippers a little bit when I swam. I appreciated that they were going to be quick to dry, and they didn’t feel squishy like a lot of sandals do, even those that are fine to wear in water. 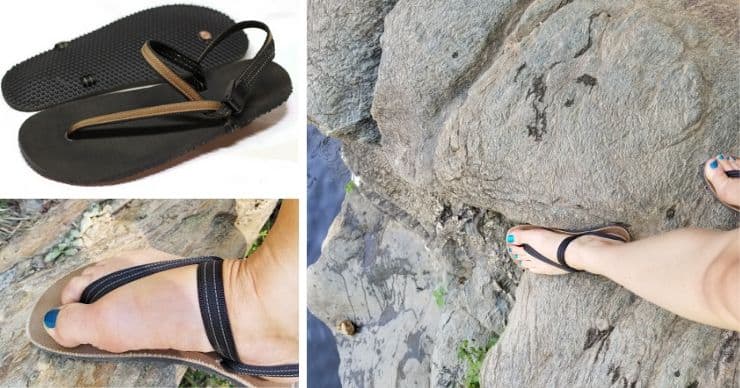 I also love that the Earth Runner shoes are so slim to be able to slide into any suitcase without really taking up much space, so they can easily be an extra pair of shoes that you didn’t plan on bringing.

If you grab your own pair, I would say that if you take walks on cement, you may want to start slowly with them because it’s kind of like walking barefoot, which is the point, but you can get a little bit of foot fatigue on manmade surfaces like that.

I would also say that this is not for people who refuse to read directions. At first, I thought the shoes were extremely uncomfortable, and that I just couldn’t get them to adjust right to my foot. But then I had to read the directions (surprise, surprise) and figured out that you can really slide the straps of the sandals all the way through the bottom so that you can make them fit any foot just perfectly.

It definitely takes some work and some trial and error, which was slightly annoying to me at first, but once I put them on this summer after messing with them at the end of last summer, I was really impressed with how well they fit and absolutely no blisters.

My son and my husband both had trail sandals that were equally or more expensive than the Earth Runners, but they covered the foot a lot more. Not only did they take longer to dry when they got wet, but both of them had blisters and band-aids on their feet the day after, and I did not.

If you decide to get a pair of Earth Runners for yourself, shop here and use the coupon code KITCHENSTEW for 10% off your order.

Have you ever worn barefoot shoes hiking before? Would you be willing to try?