For years I understood that using aluminum in my cooking and personal products was going to increase my risk of Alzheimer’s Disease. I avoided it almost religiously with some exceptions and even made homemade deodorant even though I’m not normally a DIY personal products kind of girl.

I have to tell you – I was almost disappointed to find out that it’s probably not even a true correlation.

In a Facebook conversation a few months ago, I went down a rabbit trail of information and ended up here:

2014: Is the Aluminum Hypothesis Dead? – in the 1960s, researchers found that aluminum in the brains of rabbits caused something similar to dementia. Then another research team in the 70s found higher levels of aluminum in Alzheimer’s Disease patients’ brains. That launched the “Aluminum Hypothesis” that warned that there may be a correlation between aluminum and dementia/Alzheimer’s, but both studies were quickly called into question: The rabbits ended up not being a very good example and the aluminum-in-the-brain had no proof of cause, or effect. (In other words, Alzheimer’s patients’ brains could have been more likely to allow aluminum to accumulate because of the disease, not the other way around.)

The author set out to review other research articles to determine “whether or not there is sufficient empirical evidence for the proposition that aluminum causes Alzheimer’s Disease.” On the basis of some of the question above, inconsistency in findings, and questions of exposure and causation, the author determines that empirically, there is nowhere near enough evidence to say that aluminum is a causal factor in AD.

He then explores the reasons why the public still believes this so strongly, and it comes down to a 7th Day Adventist who single-handedly initiated the myth, and the commercial marketing of “aluminum-free” products ” to perpetuate it.

So Aluminum Causing Alzheimer’s is a Myth?

The Alzheimer’s Association lists aluminum as the number 4 myth about the disease,  and WebMD deems it simply “controversial” at best.

I was a little shocked to find out that most researchers (according to this one) didn’t put any stock in the Aluminum Hypothesis, and that, also according to this article, no one is really even looking into it anymore. I also am never one to want to fall prey to marketing to tell me what to buy; I’m deeply offended.

But then, of course, upon further investigation, I found these:

You can guess which perspective I agree with and make your own choice, of course.

But Aluminum is EVERYWHERE – How Does That Impact Our Health?

My favorite article is actually this one on Forbes, written by a random immunologist via Quora. Terrible sourcing, but a very comprehensive article! The author discusses many studies that I’ve already mentioned and ultimately comes to the conclusion that “there is little evidence that exposure to metallic Al, the Al oxides or its salts increases risk for AD, genetic damage or cancer.”

And he may be right, in spite of the minor reviews that seem to claim the opposite. His sources reviewed far more studies and far more rigorously than my sources above. But he also points out that one reason it’s difficult to obtain consistent results from research is that aluminum is the third most prevalent material on earth, thought to be the most abundant metal in the Earth’s crust.

And that’s my favorite part – this chart:

My chemical engineering friends shared that our amazing human bodies can excrete aluminum at a rate of 1 mg/kg of body weight per day. Now the figures on that chart are much lower than 1 mg (hooray!), BUT – if we add up all the daily sources listed, then throw in some aluminum for cooking that is not included, then account for what we don’t yet understand, then say, “But what if someone’s body doesn’t excrete that efficiently?” (And remember what Bassioni stated.) Well, the numbers are starting to get too questionable for me.

I err on the side of great caution when it comes to my health, but I am at least encouraged that our bodies are most likely taking care of this problem for us. However –

Use Safe Alternatives to Aluminum Foil

I still think using aluminum foil is irresponsible, and I probably won’t buy another roll for years. The reasons are pretty simple, and they won’t need any studies for it to make sense:

I’ll still use aluminum foil once or twice a year for camping, because foil packets are a treat that deserves a little caution thrown to the wind. But I’ll never be one to deliver a plate of brownies covered in foil to a party or grab some to wrap leftovers or baked potatoes.

There are too many far safer and more responsible alternatives to foil for that.

How to Avoid Using Aluminum Foil in the Kitchen:

At the very least, if you’re still using foil to bake potatoes or cover brownies, reuse it again and again until it falls apart.

Want to avoid aluminum foil because of the negative health effects, budget savings or just to be kind to the earth? You don’t need it to bake potatoes.

Added bonus: The skins (almost completely) peel right off with this method, so you can easily make potato salad without having to bother with a veggie peeler.

I always figure if it doesn’t take much time, energy, or funding, I should default to “playing it safe” when it comes to the chance of a major disease. Using less aluminum foil, covering my aluminum cookie sheets, switching out my baking powder and deodorant are all fairly simple steps, so I choose to avoid aluminum in these areas. I can’t avoid it everywhere, but I accept the Baby Steps!

Other diseases possibly linked to aluminum:

Where do we find aluminum?

Here’s the list of places I’ve been paying attention to over the past year:

I’m surprised to find out that treated city water is one of our greatest sources of aluminum. That just makes my list of “Things I Need to Avoid in my Water” one item longer. Just one small part of the reason we use a Berkey water filter (chlorine and fluoride are two other reasons).

It’s estimated that people ingest 7-9 mg of aluminum each day in their food. Most city water has less than 1 g/L, and pots and pans aren’t going to leach very much aluminum. It’s hard to say how much aluminum one might ingest via their skin when it comes to antiperspirant. Possibly the scariest products include buffered aspirin at 10-20 mg per tablet and antacids, 100-200 mg per tablet. That seems like a major amount, and I don’t care if the info says we don’t take much of that into the bloodstream. If I don’t direly need an antacid, I’m not going to take one, that’s for sure.

How do you avoid aluminum? Do you think it’s worth it – and which reason??
Unless otherwise credited, photos are owned by the author or used with a license from Canva or Deposit Photos. 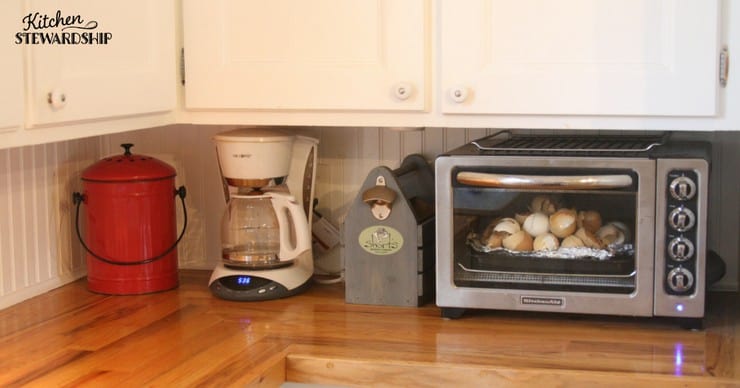