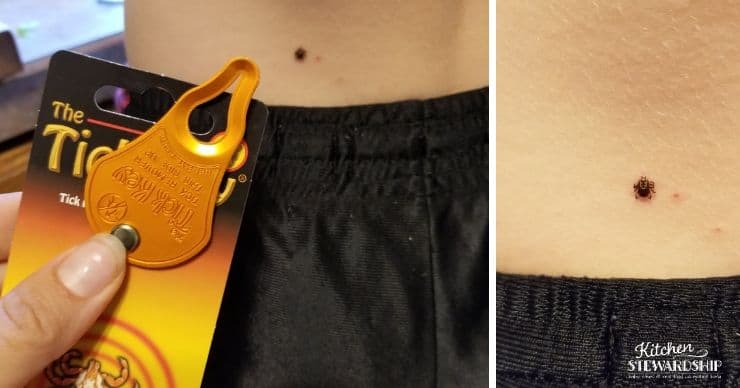 My husband, who has made plenty of changes in his day, is in shock this year because he says he’s never seen a real live tick before in all his 39 years of life, and now he’s seen three: one crawling on me, one biting our son, and another one crawling on our son. Yikes! (Also this is not to say in any way that my husband is an old dog – I don’t want to be in the dog house!!)

It’s a scary year for ticks in Michigan, and if you get a tick bite you need to know immediately how to safely remove that tick to ensure that you avoid Lyme disease and Rocky Mountain Spotted Fever.

The ones we found on us were all dog ticks, which are bigger than deer ticks (and therefore easier to find during a tick check, thankfully). 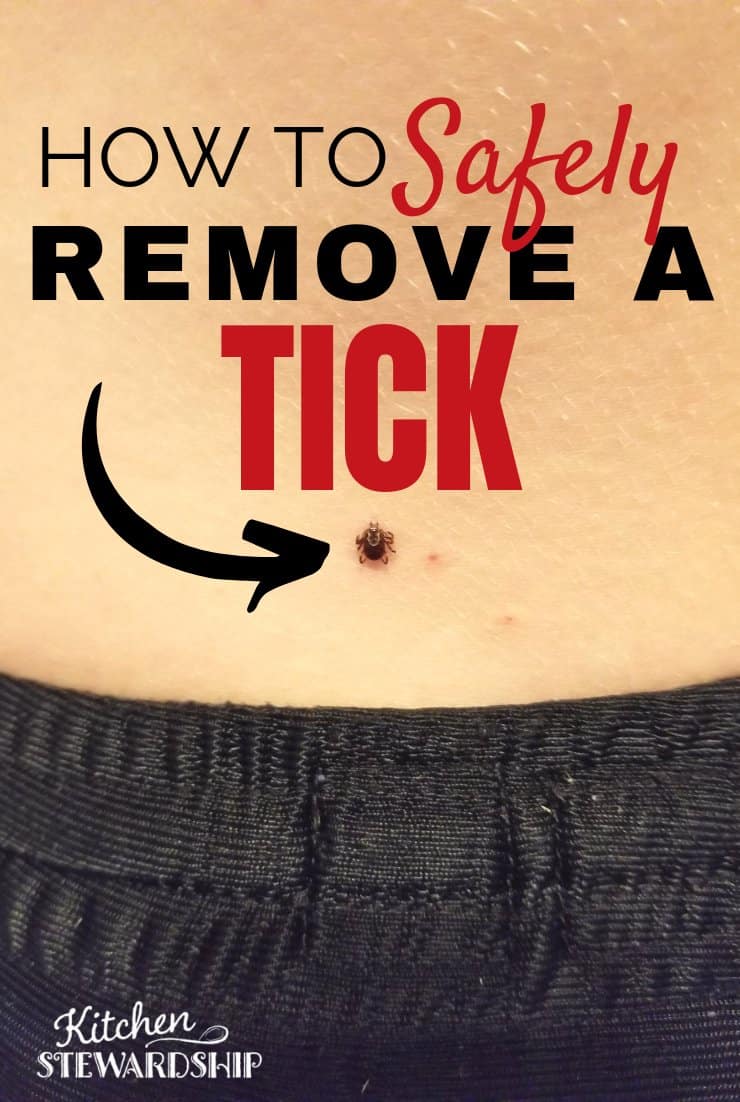 How and When To Check for Ticks

If you live in or visit any area where ticks are prevalent, especially the Eastern and Northeastern United States (the CDC has maps showing which kinds of ticks are found it which parts of the country), you should really do a tick check anytime you are out either where there are trees or even tall grasses. This may include your backyard, especially if you have lawn mowing habits or a woodpile like us. 😉

Ticks don’t stay only on the unclothed and exposed areas, so it’s really important to do a tick check on all parts of the body, especially dark moist areas where they may like to hide, like armpits, the groin area, and between the toes.

When I did a tick check on my 14-year-old Paul, some might say it was by chance that I found the tick in time, but I think God was looking out for us. You see, I’m the type of person who often says I’ll do something and then forgets about it.

Any busy mamas know what I mean?

That night, as he was cutting romaine lettuce for our dinner and I was bustling around the kitchen at two minutes to six o’clock, I noticed that his ears and face were actually dirty, like covered in dirt.

I said, “Boy, where have you been today? You’re covered in dirt!”

And he answered, “I guess it was just from crashing through the woods to get to Levi’s.”

I said, offhandedly, “You know, we should probably do a tick check tonight.” And then completely uncharacteristically, I decided to do it right away instead.

In the next moment, I lifted up his shirt, sucked in my breath, and yelled, “Oh my gosh, there’s a tick in the middle of your back!”

The whole family came running and I rushed upstairs to get our tick key, stopped to take a picture (ever a blogger I am!), missed on my first attempt, cursed in front of my children (#guilt) and then got it out on the second try.

Clearly I’m a calm, cool and collected mother who would never frighten her children (ack).

You can see that ours was pretty big in the picture, so it was incredibly easy to find, but you should know that many ticks are very tiny. When I shared this on social media, I had quite a few moms say that they’d had to pull 20 or even 60 little tiny ticks off of their toddlers. Talk about something terrifying, striking fear into the heart of every mother who just read that sentence!

Tick checks are incredibly important and you should really take your time and look carefully over your child’s and your skin, even the scalp under their hair if you can.

There’s something ominous about the flat wide shape of a tick with its six legs sticking out to the sides. As soon as I see one, I just know what it is, but pictures are worth 1000 words, of course. 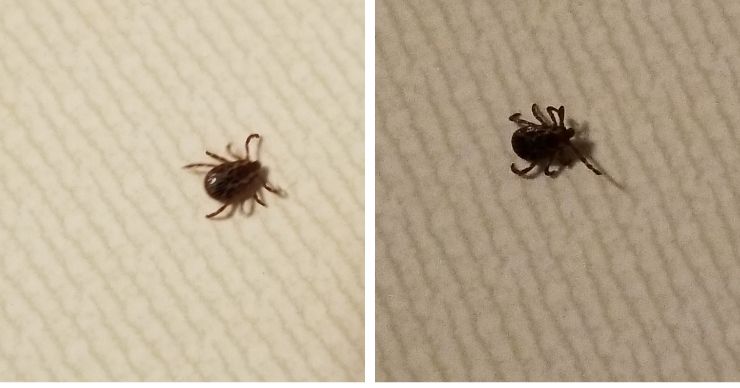 Since this one is so big, you can see it very well in these pictures. I caught this friend crawling on my arm, thankfully before he bit me! I had felt something fall out of my hair while I was at the computer and realized just before tossing it to the side that I had a need to look closer.

The quality of the photos is a bit low because what else can you do with bathroom lighting at 10pm? I took a quick video, too.

If you can’t see the video above, watch it on YouTube instead.

Again, that’s what a dog tick looks like with the white markings on its back. Definitely check out this site for other pictures and descriptions of other species of ticks, just like I had to do to convince my husband there really was a tick in the house.

One thing to note is that if the tick is flat, it’s still hungry, and that’s a good thing for you. Once the tick has been feeding, on its host (which may be your child, scary!) for a while it will get engorged and blow up like a ball, so if you see that it’s even worse.

Ultimately, if you find any sort of insect which is embedded into your body and actively biting you for more than a second, you should be concerned that it’s a tick and start pulling up pictures — after you get it out, of course!

There are very specific instructions for how to get a tick out of your body when it’s biting you.

How Do You Remove a Tick Safely?

It’s incredibly important to remove a tick properly if it’s been feeding on a human.

When a tick’s head is inserted in the body, that’s when disease can transfer most readily, particularly if the tick regurgitates into your body. There are many myths about how to properly get a tick to remove its head, like holding a match to it, using rubbing alcohol, certain essential oils, and even smothering it with butter or mayonnaise.

All of these however, run the risk of frightening the tick and actually encouraging it to regurgitate into your skin. Therefore, the most effective and safest way to remove a tick is as quickly as possible, and without pinching.

So many people tell me on social media that they just use tweezers, but the experts do NOT recommend tweezers because again, squeezing is going to frighten the tick and may cause it to either break off from its head or regurgitate into your body.

There are a few tools specifically made for removing ticks. We have the Tick Key, which worked just fine, although I still feel guilty about the curse word on the missed first try because my adrenaline was so high and I was so nervous!

Many say the Tick Twister or Tick Tornado is even more effective, particularly for the smaller sized ticks because it comes to an almost imperceptible point, and the Tick Key is a bit bigger. I think either or both would be great to have on hand and they don’t take up much space, so I like to have one in the car, just in case.

To remove the tick, you come at it with either tool from the rear end and make sure its body is above the surface of the tool, and then the head goes into the V area and can be pulled out quickly.

Use a quick sure motion and say a prayer that you get the whole thing out on the first try.

Once the tick is out, however, the fear sets in.

Lyme disease is such an awful thing to deal with and we know too many people who’ve been struggling with chronic Lyme symptoms for years and have spent thousands if not hundreds of thousands of dollars to try to rid themselves of this deep-seated bacteria.

We even know a friend who developed the Alpha-gal allergy from repeated exposures to Lyme. That means that even the smell of cooking beef could cause an anaphylactic reaction 6-12 hours later, potentially while she’s sleeping.

While her parents aren’t watching her.

It’s a terrifying disease that completely changes one’s life and it’s not something I’d ever mess with.

In fact, a fear of Lyme would be the only reason I would ever use prophylactic antibiotics.

Rocky Mountain Spotted Fever may be just as bad because it can carry the risk of death and some say that it may become chronic as well, although that’s up for controversy.

Bottom Line? Check for Ticks and Get Them OUT!

And then what? You’ll want to do what you can to mitigate any disease the tick may have been carrying, and perhaps even have the tick tested so you know for sure. Want some natural remedies for tick bites just in case?

Check out part two for tick bite remedies, pros and cons of antibiotics and testing options!

Have you ever had to remove a tick from yourself or someone else? What method did you use?

10 Bites of Conversation So Far