See? Procrastination has its upsides: I’ve stretched the Sweet, Sweet Summer series it hit another season that allows for alliteration. Now I sound cute again.

Lots of people have asked about the merits and flexibility of coconut sugar and palm sugar, and although I’m still figuring them out myself, I’ll shed some light on the issue today.

I got my first bag of “palm sugar” quite a while back when I was first getting into real food. It took a really long time to get through it because I really didn’t know how to use it well. I would put a teaspoon at a time into homemade mayo because Kelly the Kitchen Kop used it there, and every so often I used it in my water kefir, but it creates such a strong flavor/fizziness that my kids generally eschewed those batches.

I felt like I always had questions about this category of “natural sweeteners:”

What’s the Difference Between Palm Sugar and Coconut Sugar? 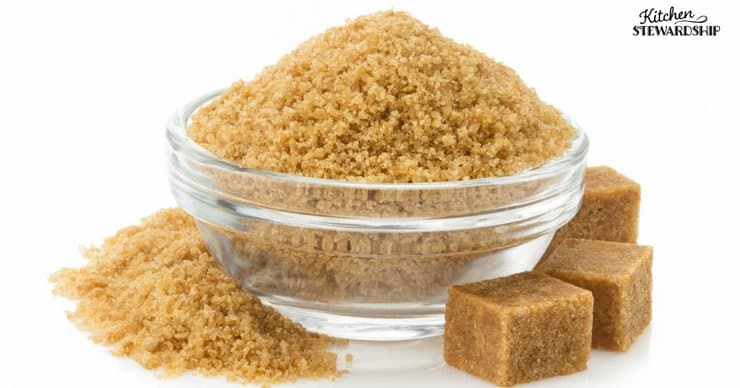 Peruse a few bags of sugar in this category, and you’ll see everything from coconut crystals to 100% pure evaporated palm nectar to the blend of coconut palm sugar and everything in between.

Since Dr. Oz, a bigtime TV personality, came out quite recently saying that coconut palm sugar was healthy and sustainable, it’s become very popular. It seems like any brand that used to just be “palm sugar” now makes sure their materials say “coconut palm sugar” so no one misses them.

Coconut sugar and palm sugar may or may not be the same thing, depending on which company you’re looking at. Yes, these are all the same thing:

Coconut nectar, the liquid form, is the same stuff as the crystals as well.

Palm sugar is from a different type of palm (although still not the variety of palm from which palm oil is procured), but is processed in the same way. Palm sugar may also be called aren sugar or aren palm sugar (meaning it’s made from the aren sugar palm tree).

So coconut sugar and palm sugar may be different in origin, but ultimately sound about as similar as beet sugar is to cane sugar, both of which are sold as “white sugar,” and you’d never know the difference unless you tried to make a Crème Brule. (more here)

From what I can gather, the words “dehydrated” and “evaporated” on your packages shouldn’t mean any difference when you’re talking coconut sweeteners. (Sometimes it does in the case of rapadura vs. evaporated cane juice, for example.)

How Coconut Palm Sugar is Made

The sweet nectar comes not from the coconut itself, however, but is harvested by hand twice a day directly from the flower. You can buy coconut nectar, like the sample I got from Coconut Secret, which is straight from the flower and very minimally processed – just heated a bit for about an hour to get rid of any excess moisture.

To make the coconut palm sugar, the nectar/syrup is heated a bit more until all the moisture is evaporated off and crystals remain.

See more about the entire process here or here.

How Does it Taste?

I’ve been sitting here taste-testing my three different brands of coconut sweeteners: Coconut Secret coconut crystals, SweetTree coconut palm sugar, and Navitas Naturals palm sugar. They’re all from the same kind of tree, and you know what? They taste pretty much the same.

Rough job, I know, sitting at a computer and eating straight sugar. The things I do for you readers…

I also compared the taste/texture with my sucanat, and there is a difference there, especially in the mouthfeel. The coconut sweeteners are more moist, like biting into something soft and firm, like a thin piece of cheese or a cucumber, or maybe a dried apricot or soft walnut would be even more accurate. Sucanat is definitely crystalized, so there’s a crunch, although it’s more dense and verging on moist than white sugar with its characteristic crackle between the teeth.

If I had to choose between eating straight coconut sweetener and sucanat, I’d choose the coconut sugar. Its caramely overtones are less in your face than sucanat’s, and in fact, “jaggery” is one name I’ve seen as a synonym for sucanat, and it looks like it’s actually coconut sugar. (Makes sense that folks in the hemisphere of the Philippines, where most coconut products originate, would use jaggery instead of sucanat/rapadura as their standard unrefined sweetener.)

Coconut palm sugar must have about the same sweetness as white sugar (sucrose), but it’s closer in flavor to brown sugar (also sucrose). It does not taste like coconut at all.

Coconut sugar is lauded for its low glycemic index of 35, whereas sugar is in the 60s and honey still at 55 and higher. This means it is metabolized more slowly and can be easier on the system. Some call it a diabetic friendly sweetener because of the GI, but a sweet is still a sweet (something that is important to remember for this whole series: we’re not looking for a health food here, just something that is not as bad for us as white sugar). A GI of 35 still isn’t exactly broccoli, you know?

Coconut palm sugar (this may not be true about any old palm sugar) is especially high in Potassium, Magnesium, Zinc and Iron and is a natural source of the vitamins B1, B2, B3, B6 and C.

The calorie count of coconut palm sugar comes in at about 2/3 that of sugar, or 10 calories per teaspoon vs. 15. I’m finding conflicting data on what kinds of sugars make up coconut sugar: some say over half sucrose, some say 2% fructose, 12% sucrose, and almost 80% inulin, a prebiotic sort of fiber that would make this a really excellent sweetener choice. More research needed another day…

More on the nutrients behind coconut sugar here…

If you are looking for sweeteners that have proven health benefits check out sorghum and maple syrup!

I’d be remiss to cover coconut sugar and not mention the buzz word “sustainable.” Because a coconut palm tree can produce sap for 20 years, can grow in arid climates and even in sand, and produces “50%-75% more sugar per acre than sugar cane, while using only a fifth of the resources,” palm sugar is very easy on the environment to produce and doesn’t burn its own bridges in production like some crops. (source)

It can even be used for fuel. We’ll see if that ends up being a positive or negative thing in the next few decades…

One thing that I see as positive in this industry is that every brand I’ve bumped into so far makes small farmers and ethics a priority, thus giving real people in countries far less privileged than America a living wage and more.

There seems to be only one source telling us NOT to use coconut sugar…Tropical Traditions. Their argument against it, which you can and should read in full HERE, basically states:

On the other hand…

Coconut Secret published a response HERE to Tropical Traditions’ claims, basically saying that they’re dead wrong on all accounts (with some citations), including information on how to both harvest coconut nectar from blossoms AND allow them to grow into coconuts.

I’ve said it many times, but it seems that again, in the world of food, nothing is simple, and you can always find sources that say the exact opposite information.

Keep in mind that BOTH these articles are written by people invested in companies that sell a product, and each article promotes that person’s product. Until an objective source can be found, we’ll have to just take them with a grain of…coconut sugar?

And what am I going to do? Although it sounds like it would certainly be possible to grow both coconuts and coconut sugar, the seed of doubt has been planted about whether the sugar competes with coconut oil and flour, both of which I depend on much more heavily than any sweetener.

Since palm sugar is pretty expensive anyway, I’m leaning toward getting a bag or two (or six, just for storage and bulk savings – update, reader points out that this set of 6 pounds is much less expensive, good call!), then not using it all that regularly and waiting this out a year or two to see how thing comes together.

Want more help and inspiration to reduce sugar? Check these out:

How to Bake with Honey

How to Use Sorghum Syrup

46 thoughts on “A Sweet, Sweet…Spring? Coconut Sugar and Palm Sugar Step up to the Plate”