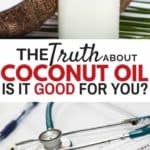 How do you use coconut oil? Refined or unrefined? Substitute with coconut oil for baking and cooking? Coconut oil is used for personal care like lotion, eye makeup remover, eczema treatment, oil pulling, and more. I could go on about the usefulness of coconut oil.

When I first started getting into traditional nutrition, I read about coconut oil. I was surprised how often I ran into it, and I didn’t even know what it was (was it liquid or solid???), but I was curious to see if I could figure out how to use it and if we would like it.

The refined has no flavor or smell of coconuts, and it’s less expensive, so I started with a 16-oz jar of it to see if some recipes calling for coconut oil were winners. I was amazed at how fast I was going through this “test” jar, so I tried the kind with the smell and flavor of coconut (“unrefined”). Again, for someone who doesn’t like coconuts, I was flying through the jar.

Now, so many years later, I can hardly imagine my kitchen withOUT coconut oil, and it’s been an interesting ride explaining our choices to others, especially in light of the media throwing bad press on it after a few negative pieces of research and one speaker at Harvard (who seems uninformed to me!).

Here are some interesting facts about coconut oil:

Coconut oil is perhaps one of the more divisive fats/oils out there, because the mainstream puts it at the very top of the “bad fats” list, while the traditional foodie folks seek it out as the healthiEST of fats (or so it feels at times, but maybe it’s because we’re engaging in an uphill battle).

Let me clear up the “what the heck IS coconut oil?” questions for you after I convince you it’s actually healthy. 😉

Is Coconut Oil Bad for You?

“Coconut oil is pure poison…more dangerous than lard,” said a Harvard professor in late 2018, and in 2017.1 The American Heart Association made tidal waves on social media by saying that no one should consume coconut oil.2

But…lard has over 50% monounsaturated fat, the same fat as in avocados! Since using it regularly (among other dietary changes), my husband’s triglycerides have gone way down, from dangerous levels to normal/near-normal, his cholesterol is in range, and I got the prize for the highest HDL (good cholesterol) my doc had ever seen! (and very low LDL)

The only thing worse than saying unequivocally that a food is a poison because it may be correlated with increased risk of heart disease – even though studies continue to come out to the contrary!

These are a number of journal research articles that support coconut oil’s health benefits!

Remember that the naysayers all claim that coconut oil is bad for the heart, raises cholesterol and LDL especially. But does it?

I was glad to see the New York Times post a sort-of rebuttal after a Harvard professor went for claiming coconut oil is poison.11 But even they didn’t seem to believe that all of the above research could be true – that far from being BAD for you, coconut oil might actually be GOOD for you.

This delightfully sarcastic YouTube video about the coconut oil controversy and the American Heart Association cracked me up!

Why You Should Use Coconut Oil

Coconut oil is, in my opinion, the most unique “oil” I’ve ever encountered. Solid or liquid at room temperature depending on your climate, it can take the place of almost any fat or oil in your kitchen (but don’t worry about a monopoly or overthrow, coconut oil is very humble).

Here’s a short list of why I’m using coconut oil in MY kitchen: 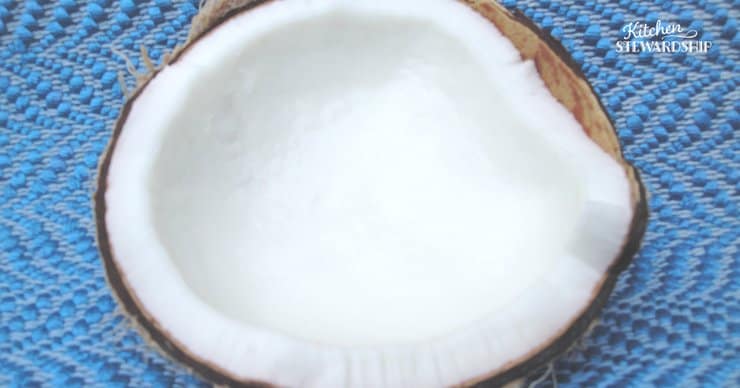 What Coconut Oil is Good For

A lot of people seem to swear by coconut oil for everything and rely on it as a miracle food. I’ve relied on it for many purposes over the years and really do love coconut products, but when I think about it as a staple food and a “does-everything” gem, I always remember this: coconuts are not grown in every part of the world.

If God intended us to subsist on coconuts, He wouldn’t have made them so temperature-exclusive.

I don’t think coconut oil should be your exclusive fat, but there are diets that instruct the users to take a tablespoon of coconut oil before every meal and have you cooking everything with coconuts. I’m happy to order my coconut oil with the help of UPS, but traditional societies wouldn’t always have had access to coconut oil.

I say, everything in moderation. Think about what you would be getting rid of if you switch to coconut oil. It’s better than canola oil, corn oil, or Crisco, that’s for sure!

Now we can dive into HOW you might use coconut oil in your kitchen, in case you’re not already a good friend of this fun fat. 😉

Coconut oil has a melting point of 76 degrees (so unique!)

How to Use Coconut Oil

I use unrefined coconut oil “raw” in my smoothies and oatmeal. (Tip for smoothies:  it must be liquid, poured in quickly and blended in immediately and thoroughly, or it will solidify again because of your other cold ingredients. Little balls of coconut oil in the smoothie is pretty gross!)  It makes the oatmeal sweet enough that I almost don’t need any other sweetener.

You can use coconut oil as a substitute in many/most recipes that call for butter, margarine or shortening, and also (melted) in any recipe that calls for “oil”, at least all those that I’ve encountered thus far. This is a straight substitution, 1 cup for 1 cup, etc.

Coconut oil works in grain products where you have to “cut in” the fat with a pastry blender, like biscuits, pie crusts, and tortillas.

It made the BEST healthy chocolate chip cookies I’ve ever made, even 100% whole wheat (and this is saying something because I’ve had the worst luck with chocolate chip cookies. They have been either burned on the bottom or spread out like a floppy Frisbee since we moved into this house. I thought I was cursed until this recipe!)

Because coconut oil has a lovely stability on account of its saturated fat, it is considered safe for frying. You can:

Coconut oil is relatively easy to melt, compared to butter. If you store it in a glass jar, you can set it at the back of your stovetop while your oven is on, and it will be liquid in no time. I’ll do this when I know I’m baking later in the day and need “oil”, because it does take a while for it to solidify again.

You can also set it in warm water, even *old* dishwater after doing dishes (just make sure the lid of your container is on tightly!). If you’re in a rush, you can melt it on the stovetop in a pan, or even in the dish you’re going to bake in inside the oven as it preheats. It melts faster than butter.

Use it on your skin!

Here are some other ways I use coconut oil (the unrefined version) in my green and crunchy home:

Where to Buy Coconut Oil

Use the coupon code STEWARDSHIP for 10% off at Wildly Organic.

Another option for where I buy coconut oil online is Soaper’s Choice – they sell oils for soap and lotion makers, but they are food-grade, and can be consumed by the tongue just as well as the skin! Don’t be thrown off by that part. 🙂

How you use coconut oil in your kitchen?

74 thoughts on “The Truth About Coconut Oil: Is Coconut Oil Good For You?”