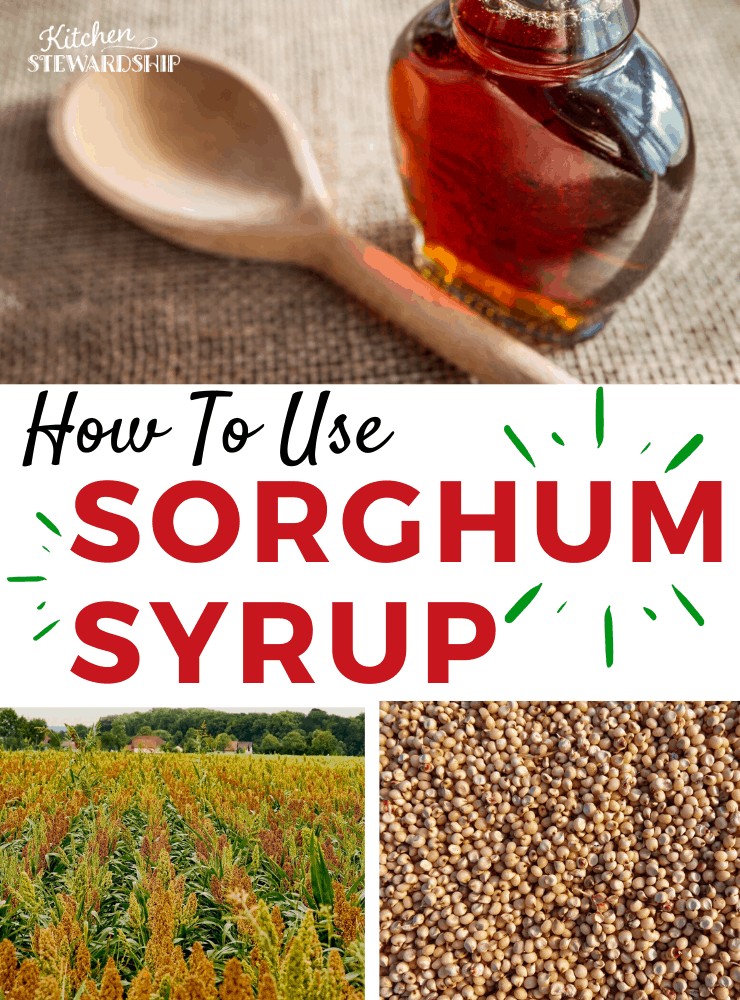 Did you know that Sorghum is the fifth most popular crop worldwide?1 I had no idea! I saw a list recently of sweeteners humans consumed 100 years ago. It was about five items long, and sorghum was on it. (Ha! If there were still only 5 I would have been finished with the Sweet, Sweet Summer series a lot sooner!)

The article also mentioned that folks back then ingested about 2 pounds of sugar per year, total, and we’re up to well over 150 per person in modern times. Seriously, we question why our waistlines are expanding??? If you’re going to use a sweetener, why not use one that comes with a little nutritional value as well?

What is Sorghum Syrup?

To be honest, although I’d seen sorghum often in real food recipes, I never tasted it until I requested a sample for this series on various sweeteners.

I was surprised to hear that some people use it on pancakes as well as in baking, so of course, I tried that straightaway.

Sorghum is sweet,  of course, but I’d say not quite as sweet as honey or maple syrup, and there’s a bit of a hearty taste like molasses, although not quite as strong as molasses.

It’s fine on pancakes…but nothing compares to maple syrup when it comes to breakfast! 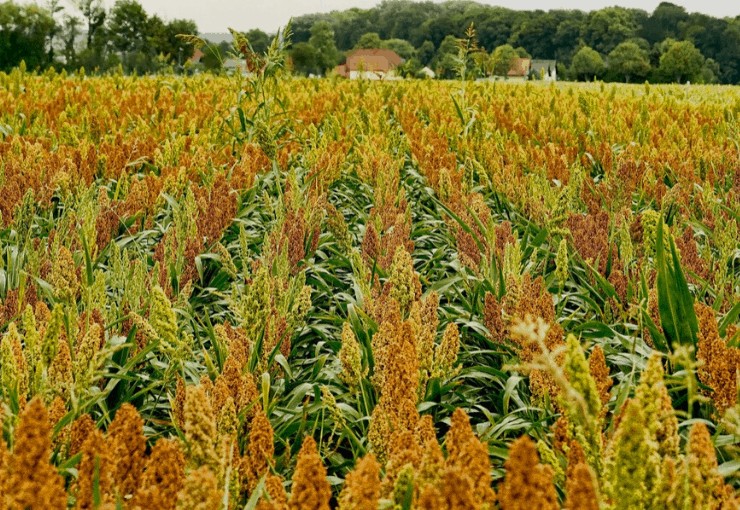 How is Sorghum Syrup Made?

Sorghum syrup comes from a plant usually called “sweet sorghum,” a plant popularly grown in climates too hot and dry for corn. It originated in Africa before traveling to Asia, Europe, and North America. Other varieties of sorghum are grown for grain or livestock use, but sweet sorghum has a juicier stalk.2

Sorghum syrup is made by cooking the juice from the stalk of the plant, evaporating the water and concentrating the sweetness. Sorghum syrup retains all minerals, and it should never be cut with anything or need any chemicals to produce.3 You can see a video of the process from Muddy Pond Sorghum Mill in Tennessee, the folks kind enough to send me a bottle.

In America, sorghum became an important crop for hot southern states in the early 1900s, and sorghum as a sweetener became rather popular when sugar was scarce in the 30s and 40s.

However, once cane and beet sugar, and then corn sweeteners like corn syrup and high fructose corn syrup, were established as cheap (subsidized!) sources of sweet, a nail was put in the coffin of sorghum syrup. It is left now to small family farms to supply the niche of healthy-minded folks with sorghum syrup.

The positive part of all that is that you can get to know your sorghum farmer, and quite often you’ll find organic or almost organically grown sorghum. 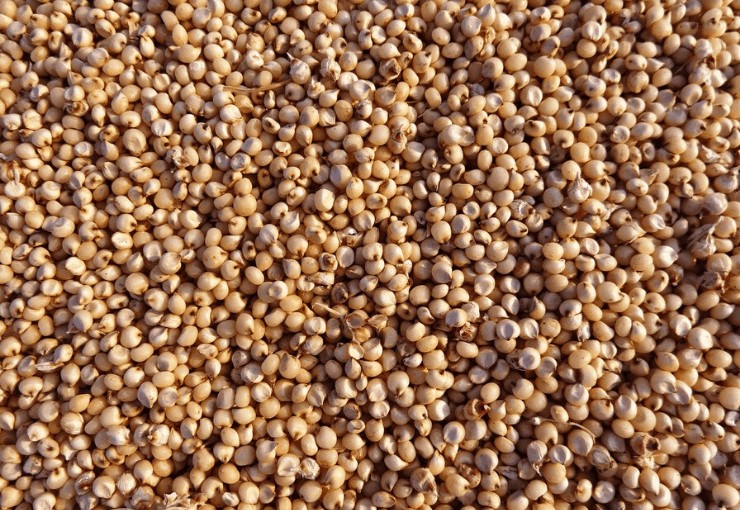 Unlike sugar, which is 100% empty calories devoid of nutrition, you can actually expect some nutritive value from a purely natural sweetener like sorghum. Before multivitamins, doctors sometimes prescribed sorghum syrup to help folks get the necessary iron, calcium, and potassium.

Check out the nutritional value profile for just a tablespoon of sorghum syrup:

Some of those percentages seem low, for sure, but remember that’s in just a tablespoon of a sweetener, where if you choose honey or table sugar, you get practically nothing. I’m impressed!

Sorghum syrup is still a sweetener, and it actually has more calories per tablespoon than molasses, maple syrup, or white sugar and about equal to honey. If you’re diabetic or need to avoid blood sugar spikes, sorghum is not a safe alternative sweetener.

How to Use Sorghum Syrup 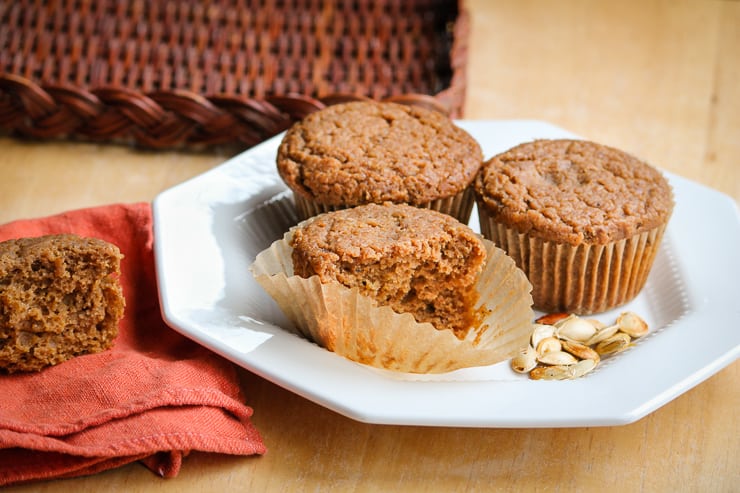 It sure sounds like sorghum can be used successfully in any recipe calling for a liquid sweetener. A huge benefit of sorghum is that it might cost less for you than honey or maple syrup. It depends on where you live – I can get local raw honey for about $16-17 a half-gallon and maple syrup for $40 a gallon (and that’s CHEAP compared to buying online because we have local maple syrup here in Michigan).

Muddy Pond has a half-gallon of sorghum syrup for $21.00 (check Amazon for their selection, too) so I think depending on where you live, it could be the least expensive natural sweetener for some.

I’d start using sorghum to replace one-fourth of the honey or maple syrup in any recipe and you could inch that up to a half. As I said, the molasses-ish taste is not strong at all.

In something with lots of strong flavors anyway, like these soaked pumpkin muffins, I bet you could start with half and move up to almost all sorghum. The grain-free granola recipe in Healthy Snacks to Go works really well with just about any liquid sweetener subbed for either the maple syrup or honey.

It sounds like it’s excellent in homemade bread products, and even along with sugar in cookies, especially gingersnap types. In the comments, Lizi says to use half the sorghum as white sugar – so if a recipe (especially chocolate cakes and such, she recommends) calls for 1 cup sugar, you can use 1/2 cup sorghum instead. I’m sorry I didn’t test all this out for you already, but now I’m totally inspired!!

Apparently, I need to do more experimenting with this little gem!

How do you use sorghum syrup?

61 Bites of Conversation So Far