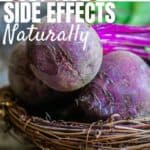 Admit it, that’s what you think of when you imagine a chemotherapy patient: Someone who is super fatigued, no appetite, lying on the bathroom floor hugging the toilet, puking their guts out and then crawling to bed.

Not my idea of fun.

Here’s the good news: My dad’s oncologist said that in reality, no one he has treated has actually thrown up in years, simply because the anti-nausea drugs, administered via IV right along with the chemo and in pill form, are so darned powerful nowadays.

Some people still feel nauseous, and many lose their appetites or their taste for food changes, but the throwing up image is one of the past – which is good, because you really don’t want a chemo/cancer patient to be losing a ton of weight because they can’t keep any food down at all. (top photo source)

When I talked with my dad’s oncologist to check whether any of my ideas for better nutrition, fighting cancer naturally or easing chemo symptoms would interfere with his treatment, I used two bad words:

I didn’t even know I was using such colorful language in front of the good doctor when I said, “I just want to check about some ideas for helping my dad to detox from chemo, since of course it’s like putting poison right in him with the chemo meds, and I want it to do its job but then get out.” (paraphrase)

He sounded pretty passionate when he corrected me: “It’s not poison, for goodness sake! It’s medicine!” (Exclamation points included.)

He went on to say something about how we don’t want to poison a patient, if we were going to poison them we’d use arsenic, or something like that. I think we just had a semantic difference – something going in to kill something else (the cancer) which can’t hit its mark without damaging/killing other parts of the body, well…sounds close enough to “poison” to me, even if that’s not the correct technical medical term.

No matter what term we use, I wanted to know that once the chemo was finished doing its business with the cancer, what could we do to flush it from his system as quickly as possible? I surmised that when people feel poorly after chemo, and perhaps the reason folks throw up, is that their body is trying to get rid of the toxin. (Ah, that might have been a better word? Or not…)

In my world, people think like that – if there’s a toxin in your body, there are natural detoxification systems plus other ways to hurry the detox process along.

In the medical community, apparently, the liver and kidneys do everything we need them to do to get rid of toxins in our bodies, they don’t need any help, and no toxins ever build up. (I paraphrase here.)

Wondering if cancer could affect you or your family? I was pleasantly surprised with my results to this super quick quiz after my dad’s successful battle with bladder cancer!

Doc said there’s nothing anyone can do to clear the chemo from the body any faster and no such thing as detoxifying from it. He didn’t know of any proven methods for easing the side effects of chemotherapy, but different people found that different methods seemed to work for them.

The reason people would throw up isn’t the body’s way of getting rid of something, it’s because chemo causes collateral damage to other cells.

In an apologetic tone, he shared that although some cancers, like breast cancer, have specified chemo meds that target only those cells in that part of the body, there are no specific bladder cancer meds that attack only the bladder cancer cells. Dad’s entire body of cells was at risk.

I don’t have a clue how to keep cells safe from attack to be honest, but I still hoped that we could lessen the side effects so my dad could continue on with his life.

He works full days, six days a week, running his business as he has for the last five or six decades.

He kept up with his card league, and he putters around in his workshop after dinner most nights, which is actually more than he used to do when he was healthy!

He’s had very few instances of fatigue or nausea at all, praise be to God.

Side Effects of Chemotherapy

Here’s what we were going to try to avoid or at least ease:

As with the dietary recommendations, I included quite a number of ideas for my parents, both for chemo detox/easing and for naturally eliminating the cancer or at least preventing it from growing further.

You can see exactly what I printed for my folks as a printable for you in the “Cancer: You Are What You Eat” post.

(Personally, I use a laptop, but I wire it in and turn the wireless off. Our router is as far from the bedrooms as we can get it, and I’m hoping to call to opt out of a “Smart Meter” for measuring gas/electric usage, since that’s just outside our bedroom window especially. I ask hubby to keep cell phones out of the bedroom while we’re sleeping. Tiny baby steps, painless ones. It’s what I can do right now.)

I don’t care if doc said nothing can take chemo out of the system. It’s got to get out somehow!!! I want to ease the load on Dad’s liver and kidneys and help him to feel better, faster. The hospital staff said that the chemo does its work in the first day or two, so we feel safe doing any detox stuff after 2-3 days. Here are some strategies that can’t hurt, and might help:

What I Hate About Natural Health

To try to isolate one factor in the human body and environment seems impossible, as we are such complex beings with such diverse experiences.

It makes healing yourself and learning about natural health very difficult, in my opinion, because there’s always the question: Did what I’m trying actually work, or would X symptom have gone away on its own in the same amount of time? Was that a total failure, or would I have felt ten times worse without my attempted home remedy?

With cancer and chemo, who knows? Maybe my dad, eating his normal diet, would have kicked chemo’s butt like this no matter what, just because he’s a stubborn old Polish man with a good attitude about survival. Maybe he feels good because the cancer itself never really made him feel cruddy. Maybe the kinds of chemo he is getting are particularly low-key.

We’ll never know…but I’m really proud of my mom for keeping up on all the things she has managed to do, really proud of my dad for saying “no thanks” to bacon and desserts at the church breakfast last week, and really glad we’re doing something.

Here’s to your health!

Read the rest of the cancer week posts for everything I’ve learned so far…this is the last article for now.

29 thoughts on “Chemo with Hardly Any Side Effects? Mission: Possible”