Everyone has a slow cooker – but for a while the Instant Pot was high fashion!

Getting a new kitchen appliance in my life is like when your average American woman gets a new pair of shoes.

It makes me feel special.

…new kitchen toys are different than shoes because they have directions.

And dinner has to get made on time whether you have bandwidth to read directions or not. Even though it’s not hard to make a bunch of everyday foods like rice, hard-boiled eggs, and steamed vegetables faster in an Instant Pot, I have to admit that mine stayed in its box, floating around from the mud room to the kitchen to the basement, for almost a year. It seems dumb, but if you’re feeling overwhelmed, 15 minutes to read directions is just too much to consider – and then you probably need to find new recipes too!

I’m glad to know I’m not alone in the new-appliance-in-box-for-six-months syndrome. I heard this from a reader a while back when I mentioned the Instant Pot on Facebook:

“I have one of those. It’s still in the box. I’m terrified it will explode if I use it.”

LOL I did the same thing – leaving it in the box – but not because I was afraid of it. I just felt like I didn’t have time to read the directions, but then I finally just did it and pushed the “rice” button and poof – done. Didn’t have to even read them. You gotta start using it, you’ll love it!

And it really is easy.

It’s SO easy, in fact, that my kids did the video of opening our second Instant Pot and getting it set up. 😉

Disclaimer and DUH important note: This was not the smartest thing I’ve ever done. One should always read directions, especially with potentially dangerous appliances! It’s part of my story, so it remains here, but now that I know more I wish I had taken a little more time back then. Please – read your instruction manual. It’s not that long. 🙂

Let’s Start at the Beginning: What’s an Instant Pot? In case you are in the dark on this, it’s an electric pressure cooker with a stainless steel pot. It will cook the same as a stovetop pressure cooker but with less guessing and babysitting (but you can’t pressure can with one).

All my Instant Pot tips and recipes apply to any electric pressure cooker (there are other brands) and most stovetop cookers should be the same (or perhaps about 5 minutes faster). You can get an Instant Pot on Amazon << that’s the one I have, and there are fancier models too.

So now the kicker: what about the mental effort and time it takes to find all-new recipes for your new toy?

I have great news.

You don’t have to.

I discovered this on accident one day when I was having a rushed morning and thought, “Eh, no problem, I can start the slow cooker meal I planned for dinner at lunchtime and just do 4 hours on high instead of 8 hours on low.” When the kids came home from school at 3:30, I remembered my plan.

It struck me that perhaps the Instant Pot could handle it, and lo and behold, dinner was saved!

As I’ve experimented more, I’ve discovered that slow cooker recipes work (almost) every time in the Instant Pot – more on the “almost” later. 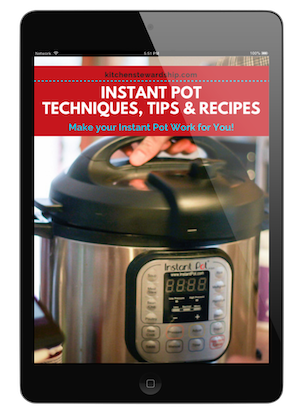 Make your Instant Pot work for you!

I won’t tell if your Instant Pot is still in its box, pinky swear. 😉

I left mine abandoned in the basement for almost a YEAR because I have a new-thing-instructions phobia, but now I have TWO Instant Pots and they’re both in constant use!

Turns out it’s so easy, a kid can do it — I’ll send you a quick video of my children unboxing and setting it up when you grab your FREE download mini eBook:

Get the Instant Pot Guidebook for FREE!

What’s in the Guidebook?

You’ll love the simplicity of your Instant Pot, and the free downloadable guidebook will help you:

Whether yours is still in the box or you’ve used it a little but want to know more about those techniques, or if you’re still pining for an IP on your wish list, I can’t wait to give you these simple baby steps to success!

How to Convert Slow Cooker Recipes for the Instant Pot

First, before you start messing with recipes, you need to understand pressure cooker timing. For the Instant Pot, a 30-minute timer means about 20 minutes to get to pressure (could be less depending on how full it is, but if you’re making a whole main dish, expect 20 minutes), plus the 30 minutes at pressure, plus typically a natural release which may take up to 15 minutes.

So yeah…30 minutes actually means an hour, but once it’s all in the pot you don’t have to touch it, and that’s much shorter than 4 hours in a slow cooker! There are just a few rules of thumb to follow to make sure your slow cooker recipe will be successful in an Instant Pot:

Oh – and don’t forget that the Instant Pot ALSO has a slow cooker functionality, so if you need to “set it and forget it” earlier in the day, the IP is still your friend, which is particularly nice if you worry about the safety of the material in your crock (more on that in the fall!). It will automatically switch to “keep warm” too so you can be an hour or two later than the timer and it all works out. Love.

Here’s a neat chart you can reference for Instant Pot cooking times for all sorts of different foods.

We’ve successfully transformed quite a few of these “meat-centric” slow cooker meals into Instant Pot favorites: And…I feel like there have been more, but I don’t always write them down in the same place. We’ve had enough successes that I’m very confident in saying that a pound or two of meat with some spices and some veggies will absolutely transition from the slow cooker to the Instant Pot.

If you forget to start the slow cooker, it may save dinner!

What About Other Kinds of Slow Cooker Recipes?

Not all slow cooker recipes are for shredded meat. Beans and legumes are another category, and I’m also pretty confident about those, having easily transformed my slow cooker lentil brown rice casserole in one try to a great Instant Pot recipe (and Mexican version) that is actually ready in about a half an hour, 40 minutes tops! Wow-ee!

Because lentils are small and cook quickly anyway, I decided to try only 15 minutes at high pressure (which is plenty of time to cook the rice properly). Quick release, and it worked! I was thrilled.

Larger beans never take more than 30 minutes, often only 10-15 if you soak them, according to the Instant Pot timing chart. We’ve made our homemade refried beans in the Instant Pot and another favorite, ham and beans from Crock On! and both worked marvelously, and I managed to transform taco quinoa chili to a pressure cooker meal as well (from the stovetop). I don’t know how many slow cooker recipes use ground meat, which creates almost no juices as it cooks, plus a ton of veggies. My slow cooker cabbage rolls cook to perfection in the slow cooker, but there’s almost no liquid to speak of. We’ve made the dish a few times in the Instant Pot, and there were always problems.

The cooker kept NOT getting pressure at all, meaning when we released the valve for quick release it wouldn’t let any steam out, even after we added a full cup of water! It burned the bottom. I can’t figure it out yet, but my troubleshooting brainstorms include: So I need to make this dish again. (And again?) I’ll report back when I figure it out, but I still have about a 97% success rate on the slow cooker adaptations to an Instant Pot, so I think you’re pretty safe trying your family’s favorites!

For the record, now that I’ve learned more about my IP, that cabbage WAS way too close to the top, so I need to try this in my 8-quart and/or cut the recipe in half.

Don’t Forget It! Pin It! Don’t forget about Traditional Cooking School’s new pressure cooking class (no. 11 on the list!), which is especially helpful if, you know, you’re like my reader from the beginning of the post who was too nervous to open the box because she thought she’d blow something up! The TCS team gives a TON of support, and their Facebook group is super active with helpful members. 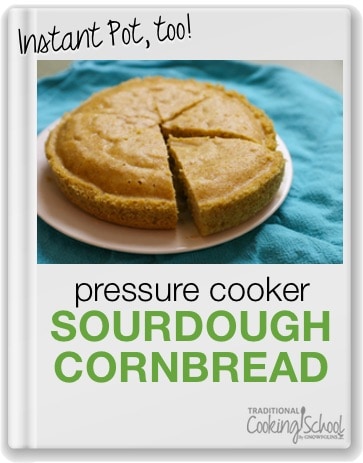 My dear friend Wardee at Traditional Cooking School can do just about anything with her Instant Pot – cakes, bread, main dishes, veggies, even “stacking” multiple kinds of food at once!

This cornbread is delicious, nutritious, super easy to make, and it only needs 12 minutes of cook time.

GET THE FREE INSTANT POT SOURDOUGH CORNBREAD RECIPE
Do you love getting new gadgets for the kitchen? And do you suffer from the leave-it-in-the-box syndrome or am I the only crazy one?

Watch Instant Pot prices on Amazon as they do change quite often!