I know you’re feeling really trusting of a grilling recipe from someone who doesn’t grill, but don’t worry – we grill plenty at the Kimball house. It’s just a great way to get some help with dinner as long as I remain completely ignorant about the mysterious workings of the grill.

I like to prepare the meat and let hubby grill it, and we’ve had some fun this summer taste-testing four different versions of a meat marinade with a dark beer base (I used Guinness).

Blending science with food is what it’s all about around here, and today I’m crossing my inner science geek with the wanna-be chef in me.

What we’ll end up with is a new grilling marinade that is supported by a study showing that marinating meat in a dark beer reduces the carcinogens formed while grilling by over 50%, compared to a light beer at only 15% or so. In classic KS fashion as well, you’ll get multiple flavorful options to fit your family’s tastes and your pantry’s supplies. This marinade has been successfully (and deliciously) tried on both beef and chicken but should also work great on pork.

What could be more fun? The classic quick marinade is to throw your meat in Italian dressing and call it good enough, from my memories BRF (“before real food”). I won’t go that way anymore because of the industrial oils, high fructose corn syrup, and other questionable ingredients in processed dressings.

A good marinade just needs some acid to tenderize the meat a bit, some oil to keep it from sticking to the grill, and some seasonings for flavor.

Using beer in the mix is a way to add antioxidants, which can counteract the formation of polycyclic aromatic hydrocarbons (PAHs), cancer-causing molecules that form from the fat and protein in meat when exposed to direct flame. (The crispy blackened parts – best part of a barbecue in my opinion – are evidence of carcinogens.) PAHs are also found in car exhaust and cigarette smoke, just to make them sound much more awful.

But instead of worrying about the latest depressing food news and forgoing grilling for the season, just thank Dr. Isabel Ferreira from Portugal for his research and embrace the craft beer movement. Use half a dark beer in your meat marinade, drink the other half while you’re grilling and enjoy a lovely summer dinner, hopefully one created with teamwork in your household.

We experimented with four different variations on this recipe and enjoyed every one. This is the most versatile, classic, loved-by-all version, but I included the spin-offs below in case you’d like to try something spicy, Mexi, or more elegant.

* I recommend a deeper dish rather than wide and flat so the meat remains in the marinade better.

* If you don’t keep Dijon on hand, it all works out fine without that ingredient (we learned at my mom’s on test number three…) 😉

* If all you have is extra virgin olive oil (use the code STEWARDSHIP for 10% off at that site!), go ahead and use it, but if you keep regular olive oil on hand (it’s less expensive), a marinade and high heat is a great time to cut costs a little.

Do you have trouble finding high quality meat locally? Me too.

I’m grateful that there’s an online source of incredibly high quality meat that I can always count on. A subscription from Butcher Box is guaranteed to be grassfed/organic/pastured/free range = all the labels important to your family’s health!

If you live in an area (like my mom) where organic local farms are nowhere to be found or have trouble sourcing certain meats or cuts, Butcher Box has you covered.

Butcher Box is having a special deal in which new members get a free pack of ground beef with every order for life. But it won’t last forever!

CLAIM YOUR FREE GROUND BEEF FOR LIFE!!(free shipping too!)

The Art of Kitchen Experimentation We tested this marinade and made tweaks three times, once on steaks, once on chicken breasts and again on bone-in chicken thighs. I make all the versions at once, working in small batches, and we really do start dinner with one bite of meat on every plate: “Everybody try number one…” and on from there before we actually serve the meal. The primary recipe shared above received the highest ratings consistently on all meats from both children and adults, but I hate to discount other favorites and just have to share them all. (Be sure to read the notes on the recipe above, most of which apply to all the versions.) The kids weren’t fans of this one, but if you like a little heat with your meat, you’ll love it. Add plenty of red pepper, because even at 1/4 cup, the hot sauce only makes a small dent in your taste buds.

Feel free to increase hot sauce or red pepper flakes by doubling them. It’s only “sorta” Mexican because no one would say, “Hey, this tastes just like tacos!” or anything, but serving it with chips, salsa and homemade guacamole would meet with no disagreements at the same time.

Once I got the balance of seasonings correct, it was my son’s favorite on chicken and probably would have received higher marks from hubby had we not had the spicy version to compete with.

The turmeric definitely makes the meat a lovely yellow and adds health benefits of its own, but if you don’t have any, it’s good without it. You can see the yellow best in that pic of 4 pieces of chicken on a plate… Who knows what this one should be called? The addition of balsamic vinegar adds a classy element and cumin pulls it in the direction of Middle Eastern food, but it doesn’t fall neatly into an ethnic category in my opinion.

It does fall into the “yum!” category very well and was my husband and daughter’s favorite on chicken plus tenderized steak.

As I always do when I’m working on a new recipe from scratch, I checked out the rest of the web for a general idea of amounts and ratios of ingredients, so all these recipes could be thought of as “inspired by” 1, 2, 3, 4, 5, 6.

Just don’t wait too long, because grilling season might come to an end before you enjoy this moist, delicious, healthier masterpiece! 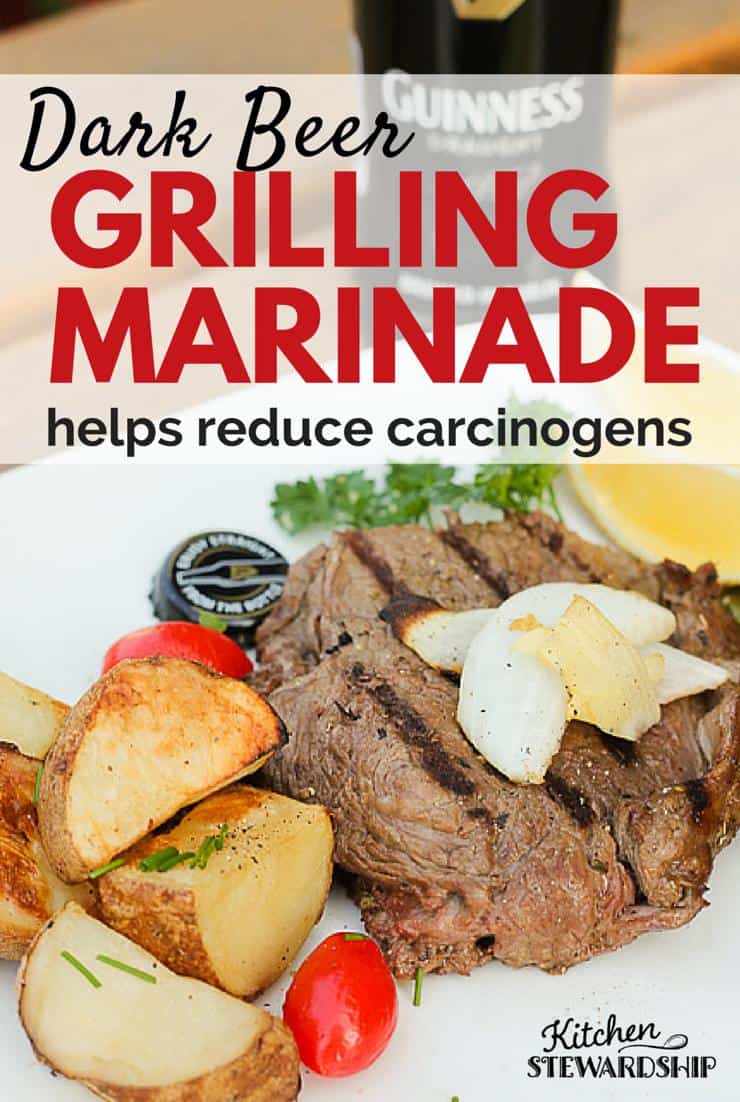 How does grilling work in your house? Do you have some favorite grill recipes?

Disclosure: There are affiliate links in this post to Amazon, and others from which I will earn some commission if you make a purchase. See my full disclosure statement here.