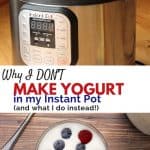 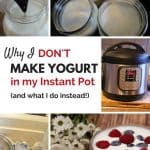 One of the major differences in the various models of the Instant Pot is that pesky yogurt feature. Do you really need that button?

Some people love making yogurt in their Instant Pot, but I will never be one of them. Here’s why.

Honestly, I want to be able to incubate my homemade yogurt for 12 to 24 hours to get as much of the lactose sugars out as possible. I have a lot to think about already when it comes to feeding hungry mouths three times a day every day. (Remember, that’s one reason why I’m teaching my kids to cook so that we can all share responsibility!)

I just don’t feel like I have the bandwidth to consider whether my Instant Pot will be tied up making yogurt when I really want to use it for a quick healthy breakfast like Instant Pot steel cut oats or Instant Pot hard boiled eggs. I’d much rather tie up my picnic cooler, which does not get used nearly as often as my beloved electric pressure cooker. 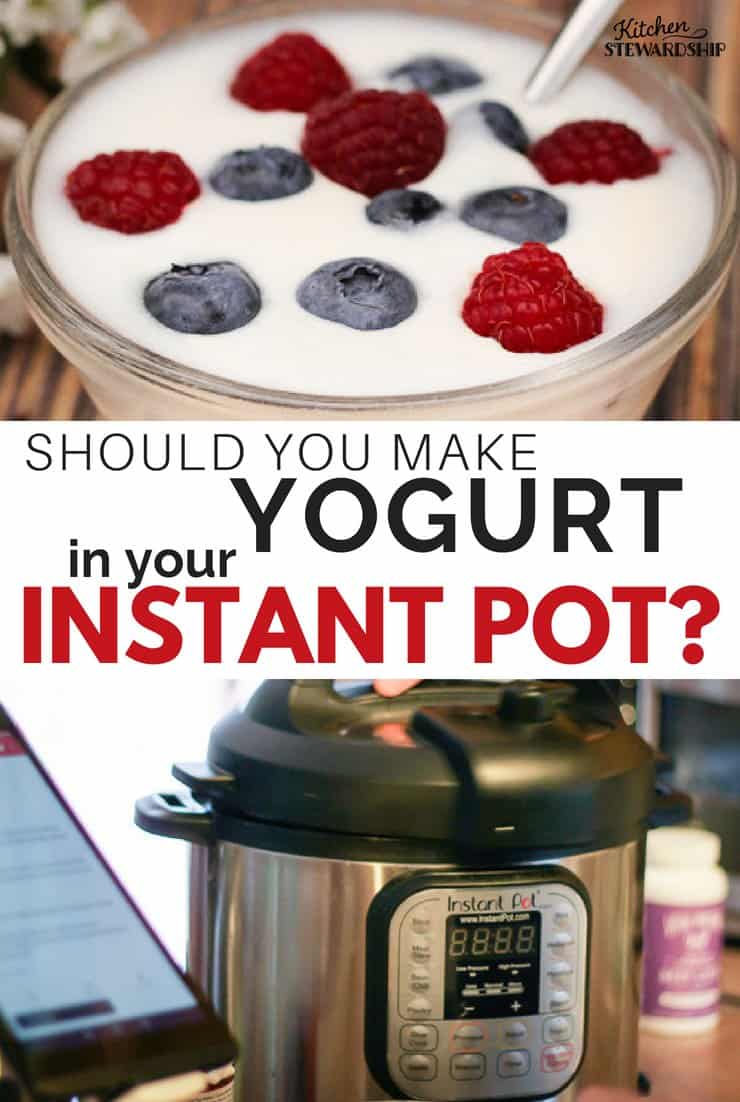 2. I Have a Great Method to Make Easy Homemade Yogurt Already.

I’ve been singing the praises of this homemade yogurt making method for almost a decade now. It’s so easy, I could almost do it in my sleep, and I have done it in labor before!

My method makes no dishes other than the jars I store my yogurt in, takes about 15 minutes total in three 5-minute chunks, and doesn’t involve moving yogurt around which always seems to make a mess on my counter if I ever have to do it. I am simply not looking to add more dishes or processes to my life.

Call me set in my ways, and I will give you a high five. I am totally set on my jar-in-pot and pot-in-cooler method of making homemade yogurt. In fact, I’m about to assert some wicked peer pressure on you to do it too! Come on… Give it a try…

Where to Buy an Instant Pot

This is the 6-quart Instant Pot I started out with. After a few years, we added an 8-quart partly because I knew I would use two at the same time often enough, partly because it was the Prime Day sale, and also because I wanted more space for certain recipes. Both are a pretty basic model and you don’t need more bells and whistles than that!

If you’re deciding on size, most people say it’s better to get a deal on the 6-quart and just have 2 rather than go big, BUT if your family has 5 or more people or you really like to batch cook or do more than a pound of beans, the 8-quart may be the best choice. My full Instant Pot review and buying guide for features, size, and model.

If you’d like to shop directly at Instant Pot’s website instead of Amazon (or just compare prices), check them out here.

If you’re still on the fence about adding an Instant Pot to your kitchen appliance arsenal here are my Instant Pot pros and cons.

I know you might be saying, “Don’t knock it until you’ve tried it.” And I am being a bit hard-headed about not giving my poor Instant Pot a chance with yogurt.

To my credit, I did give another appliance an opportunity to make yogurt once. I had a Vitaclay multi-cooker appliance that could be a slow cooker or rice cooker or yogurt maker. How cool, I thought!

That particular appliance managed the first two tasks well enough, but the one time I tried making homemade yogurt, not only was it runny, but it tasted like…ham. Just my luck that the last recipe I made in the unit was ham and beans! (That happens to be a family favorite staple, found in The Healthy Lunch Box, just not great in yogurt…)

I know the Instant Pot‘s stainless steel insert won’t absorb odors like the clay insert in question, but the sealing ring does. I do have an extra sealing ring for sweet recipes and keep it separate from my main savory ring, but I always forget to swap it out.

Whether you have a few fav meals in your Instant Pot or still aren’t using it regularly yet, I can show you the secrets to SAVE time (and money) with my favorite appliance!

May I send you my best hacks to maximize my fav appliance so you can spend more time with your family AND nourish them well?

Get IP hacks in short emails and transform the way you serve dinner:

Get the Instant Pot Hacks

I’m just a fan of making easy homemade yogurt in other ways! Not in the Instant Pot.

I’m open to seeing other points of view though, so if you are a raving Instant Pot homemade yogurt fan, feel free to gush in the comments and we can try to convince one another of the errors of our ways.

As for me, I have some jars to put in a pot and a cooler to bring in from the garage. It’s homemade yogurt day!

Have you tried the Instant Pot yogurt function? Have you had consistent, good results?

My dear friend Wardee at Traditional Cooking School can do just about anything with her Instant Pot – cakes, bread, main dishes, veggies, even “stacking” multiple kinds of food at once!

This cornbread is delicious, nutritious, super easy to make, and it only needs 12 minutes of cook time.

Get the Free Instant Pot Recipe

How to Set Up a New Instant Pot (With Video!)

How to Use the Instant Pot in a Hotel Room

10 Basic Techniques for Your Instant Pot

Is a Pressure Cooker Still Healthy and Safe?

How to Cook Frozen Ground Beef in the Instant Pot FAST