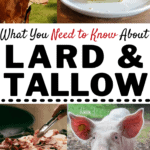 I’m all about the healthy baby steps! Let’s baby step our way into healthier fats by using lard and tallow. Learn the health benefits of tallow and lard and where to buy them. 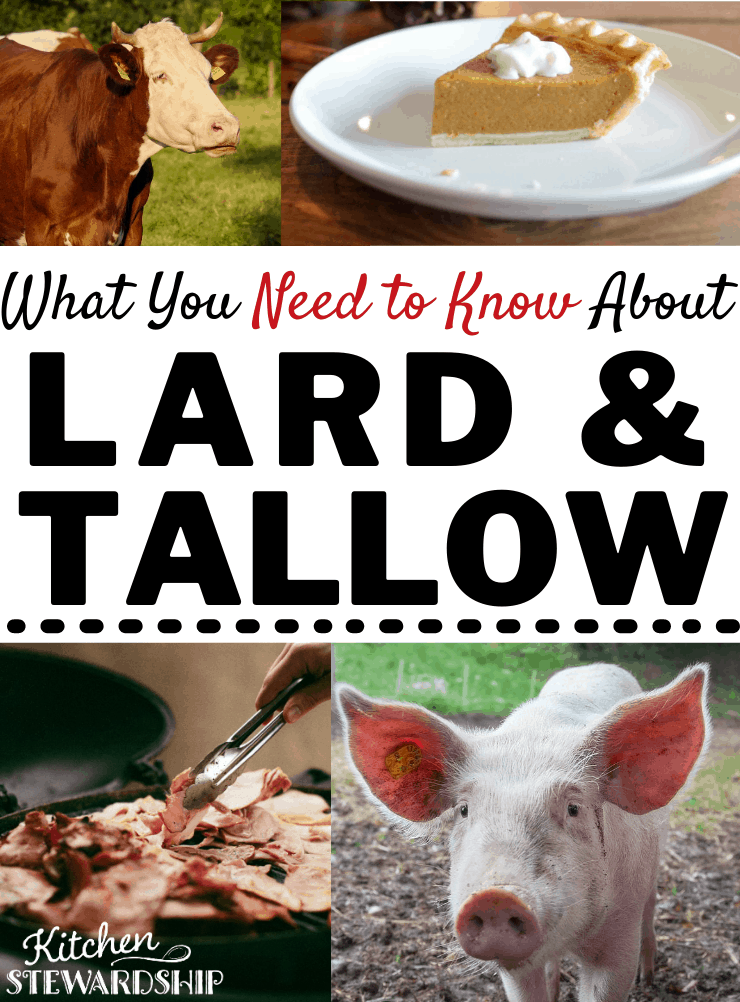 I used to spend a LOT of time cutting off every single little tiny bit of fat from every cut of meat I brought home from the grocery store. I tried to buy “lean” whenever the budget would allow it. I skimmed every drop of fat from the top of my homemade chicken broth recipe.

I’m still not going to eat gristle or leave the fat on my chicken for stir fry, because I think the texture is nasty. But I’ve purchased lard, I leave the fat in when I drink chicken broth (because that’s where the immunities are!), and I used the fat from my beef stock to fry french fries. (Oh. My. Can you say “Heaven?”)  I’m coming around to the value of animal fats. Our ancestors ate them, even prized them, and there are some surprising components in them as well.

If you asked me a decade ago what “tallow” was, I probably would have given you an answer worthy of Balderdash (I ROCK out that game!). Like:  “A build-up of ear wax in the inner ear canal that results in partial hearing loss in the elderly.”  Oh yeah. Two points for that one for sure.

Lard is fat rendered from pork.

If you asked me what “lard” was, I bet I would have cringed first! I still cringe a little when I think about it in pie crusts…yet I might have to buy some good stuff this winter and try my hand at it!

I’ve learned to relax about animal fats in the last decade!

Health Benefits of Lard and Tallow

Ever heard someone say, “So-and-so ate bacon and eggs every morning and lived in good health until s/he was 90+….”  That might be because the pork fat in bacon is not an unhealthy fat.

Not only is saturated fat, like animal fats, actually helpful to your body’s systems, but lard is flying under the radar with 51% monounsaturated fat. You’ve seen those words before: mono- fats are the primary fat in olive oil, peanut butter, and avocados, some of the healthiest billed fatty foods in the land. So there. You can have your bacon and eat it too! (There is a catch. I’m so sorry. Keep reading.)

(Before you go on, be sure to read the Health Benefits of Saturated Fat post if you missed it. It’s the keystone to accepting animal fats as less than garbage. Start with the Fat Full Fall series if you’ve missed a lot!)

Is Lard Good for You? Yes!

Is Tallow Good for You? Yes!

Where to Buy Lard and Tallow: How to Find “Good Meat”

Finding tallow in your supermarket is probably as difficult as chasing down the cow and starting from scratch, and lard only slightly easier. Once you’ve found some, it’s time to ask questions.

Unfortunately, most supermarket meat is factory-grown, where the animals don’t get exercise and have diets meant to make them fatter quicker. They are treated with antibiotics to prevent the spread of disease in crowded areas and hormones to speed up the process even more. (Not always, but you won’t know unless you ask.)  Toxins like these plus any chemicals on the animals’ feed will concentrate in the fat, so more than any other time, we must know about the life of our food when we’re buying animal fats.

Most supermarket lard is also hydrogenated to ensure shelf life and treated with preservatives like BHT and BHA, which have their own health issues.

I found lard at a local Sav-a-Lot that caters to the Hispanic community, and I called the company before I purchased it. I was assured that the lard was rendered pork fat, nothing added, not hydrogenated. The package, of course, states that BHA and BHT are added, so with that as a starting point for accuracy, I’m questioning the depth of knowledge of the customer service rep I spoke with! I’m about halfway through the tub…and I’m thinking maybe I should cut my losses and pitch it anyway.

RELATED: What is side pork? And how to make it taste like bacon.

This is “the catch” I spoke of: you only want to eat lard or tallow from good sources. Real lard needs refrigeration. You will probably have to go to a local butcher (or even a farm) to find a good source. (I can get it at Van Ball’s on Plainfield here in GR.)

Here are (some) questions you should ask:

Tallow has a similar list. The cows should be grass-fed, entirely if possible, with no meds. I don’t have a source that I’ve tried for tallow, but I trust Kelly the Kitchen Kop’s advice. Her source is U.S. Wellness Meats. Tallow does not need to be refrigerated at all if it’s used often enough and in an airtight container.

How to Make Lard and Tallow Yourself!

The fat on the top of your homemade beef stock is tallow, as is, I believe, any liquid beef fat you come across. Scoop it off and save it for frying.

Bacon grease is a form of lard. If you have some local, pastured bacon, save that grease. It makes some recipes simply divine. I heard through the grapevine of a chef who said, “Put bacon grease in anything and all the customers love it!”

The not-so-hard but longer way:

Cheeseslave has an excellent post on how to render lard and tallow. I’ll refer you to her! The Wikipedia article on the subject is actually quite good and lists a lot of the traditional ways lard can be used in cooking and baking.

To render simply means “to extract by melting”. You render fat by making it liquid, separating it from anything else, then allowing it to solidify. Rendered fat has an advantage over raw meat; it has a shelf life. Our ancestors used to leave a cup of fat on the counter and use it until it was gone. In fact, my grandmother used to. This isn’t new information.

They are both solid at room temperature and have a very high smoke point, so they’re great for frying. They’re also quite healthy.

How Did Lard and Tallow Get So Misrepresented?

Advertising. Marketing. Media. Even back at the turn of the century, companies realized that if they could process and market something, they’d make more money than if they just helped farmers sell their whole food products. The shortening industry mounted an effective attack on lard that has turned the tongues of Americans for 100 years.

How will you add lard and tallow to your healthy diet?

63 thoughts on “Food for Thought: Lard and Tallow, Healthy Fats?”