An easy recipe for homemade Irish Cream, just like Bailey’s but with real food and no cans! This will be the best Irish Cream Liqueur you’ve ever tasted! 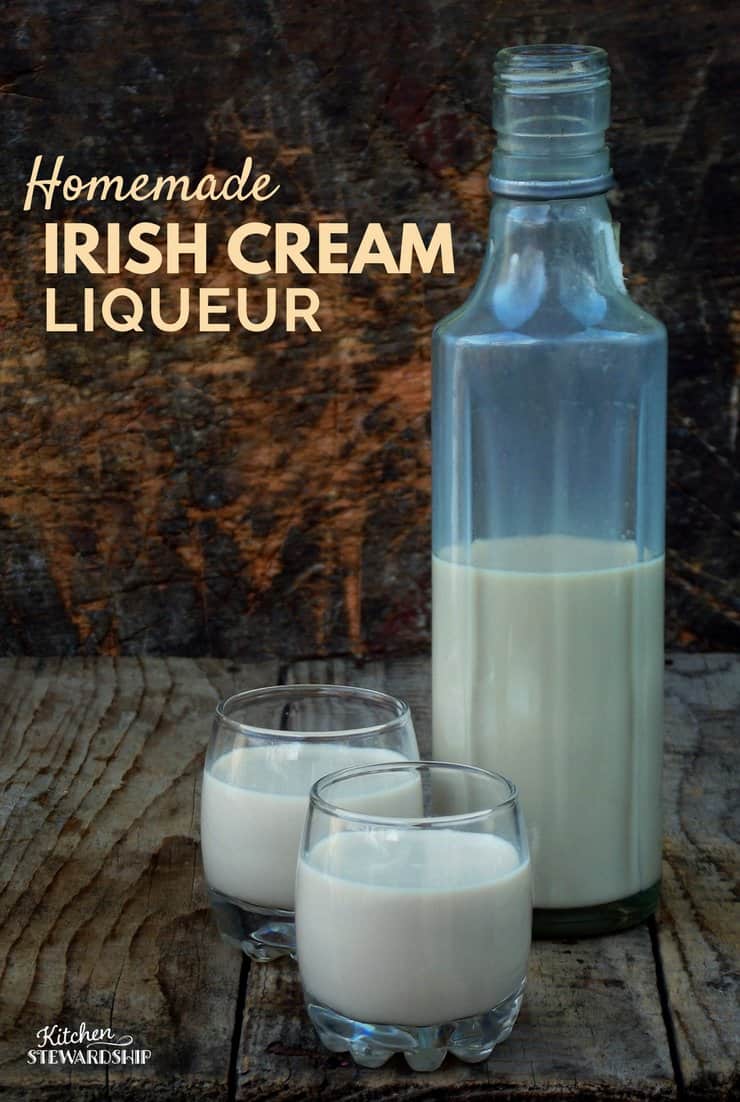 Even though this is not the first time, nor the second time, but the third time I’ve talked about liquor here at KS, please don’t think I’m hitting the bottle all the time after this post! (I only had a shot or two to of this homemade Irish Cream liquer to tsate test befroe stiting down to rwite, I swear…just kidding.) 🙂

Irish Cream goes great in hot chocolate or coffee, slides down easy “on the rocks,” and you can also make a virgin version of this recipe which tastes quite a bit like melted ice cream – amazing – and was a real treat for my kids to taste test today. Just don’t put the vodka in, taste a bit, and then try to say “virgin version,” at least not where anyone can hear you!)

My husband’s family members cried out in glee, “We didn’t know you guys made your own liquor!” when we presented some of them with homemade Irish Cream a few years ago.

I think they imagined a distillery in the basement or something, but this recipe is much more “mix and drink” than “ferment and distill.” There’s nothing to it.

I did fiddle with the ingredients quite a bit since I last made it. I was already preparing my “it’s okay to compromise” speech for this post and determined to just follow the recipe and use powdered milk…but then I decided to try a real food version.

I went from this original recipe: To this real food version: I was already using a homemade sweetened condensed milk even years ago just to be frugal, but now I wanted to avoid the white sugar and especially the dry milk powder in that recipe. (Even though I’m not totally afraid of nonfat dry milk, I don’t have any love for the stuff. I had to pull the box in from the garage where it’s relegated to a tomato blight buster recipe, just to make the control half batch.)

It took some digging to see if I could figure out how to make a homemade, sweetened condensed milk WITHOUT powdered milk, but I found some good jumping off points.

If taking real food on the go is a challenge for you, you’re not alone.

Join thousands of other happy owners of Healthy Snacks to Go, an eBook that is helping real foodies everywhere keep their families nourished (and kids happy) even when they need to pack a snack — without resorting to processed junk food or expensive health food store treats.

With over a dozen different “bar” recipes alone, including many that are grain-free and contain zero refined sugar, I guarantee you’ll find a new family favorite in Healthy Snacks to Go.

Wikipedia told me that condensed milk really is what it sounds: just milk that has had a great deal of its water content boiled away, just as you might condense chicken stock. Quite a bit of sugar is also added, which helps to preserve the final product. I also learned that evaporated milk is very similar to condensed milk in that it is milk condensed down to about half its original volume.

Because evaporated milk has no sweetener added, it is not as shelf stable and requires more processing than condensed milk. However, if you’re not trying to avoid the BPA in canned goods and simply wish to use your own less refined sweetener and perhaps less of it, you could always just add about 1/2-2/3 cup sugar to a can of evaporated milk, and voila! Sweetened condensed milk.

Although tempting, I chose to go real food all the way.

My goal was to reduce the volume of the milk by about half, although after two hours of a gentle simmer, I decided 1/3 was good enough. I started with 1 1/2 cups of whole milk, added 1/2 cup of organic cane sugar from Wholesome Sweeteners, and stirred to combine every 10 minutes or so. I kept the fire going very, very low (very low!) because I have a tendency to forget things on the stove, especially over such a long time, and I didn’t want to take a chance of scalding the stuff.

After two hours, I got the mixture down to about a cup total, which was good enough for me. It was noticeably thicker, although not nearly the consistency of a can of sweetened condensed milk. If I had followed the proper ratio of ingredients, I should have used 2/3 cup sugar, but I chose to cut it down a little.

While still warm, I whisked in 3 Tbs. butter and 1 tsp. vanilla.

If you happen to totally forget and it boils off too much, just keep going. Get it down to a fourth of its original volume, and you’ve got dulce de leche!

Now that you know how I finagled some real food ingredients into a liquor recipe, here’s how to make the Irish Cream itself (the pictorial of the method follows this printable):

Store cold for up to 3 months, on the shelf for one month.

Be sure to label your bottles with these expiration dates, especially if you’re giving gifts.

(It might be possible to drink the Irish Cream even 6 months later in cold storage. I might have tried it. Don’t take my word for it, though, my insurance-salesman father-in-law would say that’s a bad idea.)

If you want a virgin version for children, pregnant women, or just for a special coffee creamer delight, simply leave the alcohol out. The preserving properties of alcohol will not occur, so be sure to refrigerate. The life of the drink will be equal to the life of the milk and cream you use.

*I know, Hershey’s syrup isn’t exactly real food. It’s only a few teaspoons, right? I’m sure there are lots of real food chocolate syrup recipes, but for two teaspoons, I’m calling compromise. You can simply omit it and hardly miss it.

Also, the eggs are listed in the original as optional, but (1) even if you’re afraid of raw eggs, the rest time with the alcohol will kill any germs, and (2) aren’t real foodies supposed to embrace raw eggs? I leave them in.

Beat eggs until thick and lemon colored. This is achieved fairy easily with a whisk, but a hand blender or whisk attachment to a stand mixer does the trick nicely as well.

Slowly add the other ingredients, beating well after each addition.

Pour into sterilized dark glass bottles. I recommend a funnel. Allow to rest at room temperature for one week before drinking.

Store cold for up to 3 months, on the shelf for one month. Be sure to label your bottles with these expiration dates, especially if you’re giving gifts. (It might be possible to drink the Irish Cream even 6 months later in cold storage. I might have tried it. Don’t take my word for it, though, my insurance-salesman father-in-law would say that’s a bad idea.

If you want a virgin version for children, pregnant women, or just for a special coffee creamer delight, simply leave the alcohol out. The preserving properties of alcohol will not occur, so be sure to refrigerate. The life of the drink will be equal to the life of the milk and cream you use.

How to Choose and Sterilize the Bottles

I have used all sorts of bottles in the past, always repurposed. Although you can buy new dark glass bottles at a beer and wine making store or online somewhere like this, I have found these work just as well:

Like that touch of class with the wax paper and rubber band on top? That’s an example of one you don’t give as a gift!

You will likely want to get the labels off any bottles you’re going to repurpose. I generally find that a good soak in hot dishwater and my scraper for stoneware or cast iron does the trick nicely. A vinegar-soaked dishrag resting on the bottle might help get stubborn labels off.

You have a couple options to sterilize as well. Always wash and rinse the bottles thoroughly first.

In case you’re curious, this is the recipe that I used to use and the one found most easily on the web. If you need something quicker and easier and aren’t bothered by using dry milk powder, then this recipe is your best bet.

Either mix together in a blender on high speed until dissolved, or microwave on high power for 60 seconds, whisk, then microwave at medium-high power for intervals of 30 seconds, stirring in between, until completely dissolved (usually 3-4 times). You could achieve the same results in a saucepan with constant stirring.

The recipe is very thick! I actually added a bit more hot water today just to thin it up and bring the total volume up to one cup.

Be sure to visit the Beverages course of the Whole Foods for the Holidays progressive dinner for more festive beverage recipes.

Let us know in the comments how much you enjoy your homemade Irish Cream!

Disclosure: This post contains affiliate links from which I will receive a commission. Wholesome Sweeteners sent samples of sugar to my house. See my full disclosure statement here.

Both recipes, for Irish Cream and Sweetened Condensed Milk, are adapted from Cheaper and Better.