Chat with us, powered by LiveChatSkip to content
Jump to Recipe 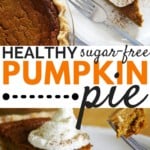 It’s time for the KS test kitchen to get some action again!

Today we’re testing a few different ways to make healthy pumpkin pies, deemed “healthy” because even though the pumpkin pie still contains sweetener, it’s farrrrrr less than your average pie and all the other objectionable non-food ingredients have been removed. It’s still not as healthy as a salad or chicken soup with homemade chicken stock or anything, but it’s so much better than what we’re used to seeing this time of year.

This recipes includes pumpkin, which is a super food, eggs (don’t let anyone tell you those aren’t healthy), heavy cream instead of canned milk (clear improvement; I believe in saturated fat), yummy spices, and only a quarter cup real maple syrup per pie. Compare that to a cup of sugar in most pumpkin pie filling, and I’m tickled to serve this for dessert (or, um, breakfast, day after Thanksgiving, baby!!).

The crust is whole wheat and uses your choice of healthy fats (even though some say a pie crust is the one place one should always just use white flour!). It’s good, and I’ll even show you how to roll out a crust using my grandma’s tips (she is a totally amazing pie maker).

Now…enough chit chat. Let’s get to the pie-making.

I’ve been fiddling with a homemade pie filling that is both easy and delicious for the last few years. (It’s always my job to make the family Thanksgiving pumpkin pies.) I knew basically the spices I wanted and the big change that I was testing this time was leaving the eggs in the filling whole vs. separating the eggs, whipping the whites into a meringue, and then adding the yolks later, or also separating the eggs and whizzing them into foam, but not quite meringue.

Egg whites whipped into a meringue

Can you tell which one is fluffier? Ha!

In the photos above, you can tell the one with separated eggs because it is in a crumbly crust (I was testing another blogger’s barley crust, and it didn’t go so well), plus the filling is so much fluffier.

That step makes a HUGE difference. Without separating, it’s like a traditional pumpkin pie. Custard-ish. Normal. With the whipped egg whites, it’s truly lighter and more airy. Can you tell the difference in the slices?

The meringue egg whites are in the piece with the whipped cream.

I’m going to go out on a limb and say that it’s worth the extra time and dishes to separate the eggs, especially since you probably don’t make pumpkin pies all too often. If you’ve been following KS very long, you’ll know that that’s a big deal. Extra dishes, and I’m saying they’re worth it?

Uh huh. This pie is that good.

No cans needed for this pumpkin pie – perfect flavor and crust every time without any processed ingredients. Healthy enough to eat for breakfast!

for one pumpkin pie (filling)

To make your own pumpkin puree, which may very well be the step upon which the success of this recipe depends (I cannot guarantee results with a can, as I’m convinced I’ll never make a pie with canned pumpkin again after trying this one):

To assemble the pie:

Even better, believe it or not: Use a stand mixer with a whisk attachment (or a really strong whisking arm) and whip the egg whites all the way into a meringue with stiff peaks.

Need crustless? Pour into a greased pie plate or 8×8 glass dish, and bake at 375F for 45-60 minutes (until knife inserted in center comes out clean).

You might want to taste the filling before baking – I didn’t use salt, and it was really good, but I noticed that the recipe on “the can” that I used to like calls for 1/2 tsp. salt per pie. I hate for your flavor to fall flat because of no salt…I think I’ll add 1/4 tsp. this year and I bet it’s even better!

No heavy cream? Whole milk will work in a pinch.

For a creamier yet tangy sort of flavor, use about 1/3 c. sour cream in place of part of the milk in the substitution above. It’s good!

Got an extra half hour? Freeze the crust after it’s in the pan for 30 minutes before filling/baking and it will taste even better.

Need a gluten-free crust? This one is unique and really yummy: walnut oat pie crust

How to Roll Out a Homemade Pie Crust

Open in the pie plate, using the same passing back and forth that you did to get it folded:

You can cut off the edges, leaving about an inch hanging over, if you choose. I didn’t have an excessive amount, so I just tucked. Fold the excess toward the outside, tucking under like so:

There are lots of ways to finish off the edges, from using a fork to special tools to your knuckles, like I do. The purpose of this technique is to make a pretty crust, of course, but also to seal the edges – which is more important on a 2-crust pie than a one-crust pie so all the filling doesn’t ooze out.

I didn’t think I’d be able to demonstrate this part but was going to ask you to use your imagination to fill in the blanks – see the imaginary other knuckle between these two?

Then I decided to risk it, set the camera on 10-second delay, and hold it under my chin:

I actually switched to using my right index finger and left knuckles after the photo so I could sneak between the pie dough and the glass plate better, but I figured I’d drop the camera if I tried again.

What Fat is Best for Pie Crust?

This was the first time I’d tried making a pie crust with lard, and I was hoping for the moon…

My friend, whose last hold out on Crisco was pie crusts, says that lard and butter don’t hold a candle to Crisco – and then she tried palm shortening. She was won over!

If you’ve got a love of baking or a passion for flaky, light pie crusts, try it. It’s very easy to work with, not hydrogenated like Crisco but naturally solid, and Nutiva has a version combined with coconut oil, and one that’s just red palm oil.

I can’t wait to hear if this revolutionizes your Thanksgiving dinner – or even becomes a part of your life more than once a year!

Other Thanksgiving Resources for Real Food: